Taťána Petrasová, a Czech art historian, has been awarded a prestigious decoration for her achievements in the fields of education, science, and culture – the Order of Academic Palms. She received this honour during a ceremony at the French Embassy in Prague.

The Order of Academic Palms (Ordre des Palmes Académiques) is one of the oldest decorations for civilians. The honour, bestowed upon personalities with significant contribution to education and science, has been awarded since the 1950s. Petrasová, who is a member of the Academy Council of the Czech Academy of Sciences, has been granted the Order in the grade of Knight.

Taťána Petrasová is a renowned expert on the art of the 19th century, as well as author of many publications and exhibitions. Among other books, she edited a 1000-page volume Dějiny umění v českých zemích 800–2000 (History of Art in Czech Lands 800–2000 A.D.), which examines the changes and transformations of artistic production in Czech lands since the times of the Great Moravia. The book, published in autumn 2018, was being researched and prepared for almost fourteen years. 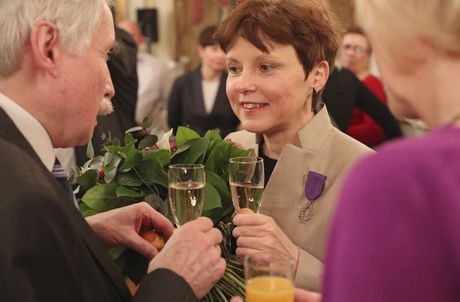 “The bestowal of the Order of Academic Palms in the grade of Knight pleased me immensely. I take this as a support of joint efforts of the Czech Academy of Sciences, Centre national de la recherche scientifique (CNRS), and Charles University to establish a research institute at the Centre français de recherche en sciences sociales (French Institute for Research in Social Sciences), similar to existing CNRS centres in Berlin, Naples, or Oxford,” said Taťána Petrasová with the distinction – a gold-plated medal in the shape of palm leaves – shining beautifully on her shoulder.

Main photo: Luc Lévy (right), Counsellor for Cooperation and Cultural Action of the French Embassy, bestows the Order upon the historian

Original Czech text prepared by: Alice Horáčková, Department of Media Communication of the Head Office of the CAS
Photo: Martin Mádl, Institute of Art History of the CAS