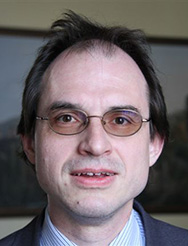 Stefan Michael Newerkla was born in Horn, Lower Austria, in 1972. After his final exams at the Humanistic Grammar School in Zwettl, he studied Slavic philology, English and American studies at Vienna University and obtained his PhD degree from the same university with a monograph on diglossia in the educational system of the Czech lands using the example of Pilsen during the years 1740–1918. He received his venia legendi (habilitation) in 2003 with a monograph on language contact between Czech, Slovak, and German as well as an etymological dictionary of German loanwords in Czech and Slovak. Moreover, he won the competition for the professorship in West Slavic Linguistics at the Department of Slavonic Studies of Vienna University in the same year.

So far, he has published several books and more than 110 original scientific papers, he co-authored text and exercise books on Czech and several other scientific books, initiated and managed several scientific projects. At the moment, he is a Corresponding Member of the Austrian Academy of Sciences, external member of the Academy Assembly of the Czech Academy of Sciences, Executive Board member of the Institute for the Danube Region and Central Europe (IDM) and the bilateral study and research grant programme AKTION, member of several scientific boards and co-chairman of the Standing Conference of Austrian and Czech historians on common cultural heritage by the Czech Ministry of Foreign Affairs and the Austrian Foreign Ministry (BMEIA). Moreover, he his member of several advisory boards of scientific journals, i.a. the Czech journals Česká literatura, Linguistica Brunensia, Slovo a smysl (Word & Sense), Studies in Applied Linguistics (SALi), Listy filologické (Folia philologica), and Slovo a slovesnost. He acts as reviewer for several grant agencies (i.a. GA ČR, DFG, SNF, VEGA, …) and the Alexander von Humboldt foundation.