Polarography, a ground-breaking analytical method in physical chemistry which has found application in dozens of fields, recently celebrated its centenary. The current results from researchers at the J. Heyrovský Institute of Physical Chemistry of the CAS are also promising for a variety of industries ranging from food and energy to healthcare. The search for technological innovations and establishing cooperation between science and industry was the focus of a conference held as part of the series Physical Chemistry for the 21st Century – from polarography to nanotechnology.

In the words of Petr Krtil from the J. Heyrovský Institute of Physical Chemistry of the CAS, the practical use of basic research results is not as often discussed as in the case of applied research. However, it is discoveries in fields such as physical chemistry that contain the most potential. “Our civilisation is based on electrochemical processes,” Krtil notes. “How we generate energy, how we transform it, how we store it, and how we use it – this is all based on the principles of our field.” 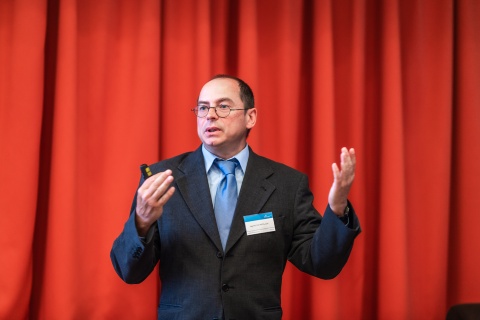 Petr Krtil from the J. Heyrovský Institute of Physical Chemistry of the CAS

The conference brought together representatives of the scientific community as well as representatives of companies and businesses from the nuclear energy sector, chemical industry, tech centres, and medical facilities. For the first time, researchers presented the results of their work directly to the intended target group, which can potentially make use of the results in the form of technological innovations.

Storage and transport of energy
A key research area is the search for ways to manage energy. In their development of advanced batteries, researchers at the Heyrovský Institute are discovering how to increase not only battery capacity and performance, but also their durability and sustainability. One result, for example, is an aqueous battery made from extremely cheap and recyclable materials. Its capacity is already comparable to some commercial batteries.

Another topic of interest is the development of chemical agents which could allow for energy sources to be transported efficiently. For instance, a research team led by Jiří Dědeček is developing catalysts for the oxidation of methane into methanol.

Jiří Dědeček from the J. Heyrovský Institute of Physical Chemistry of the CAS

About five percent of the total methane produced is burned off as mere waste from oil production. If it were possible to transport methane cheaply, e.g., in the form of safe liquid methanol, this residual product of oil extraction could be used to produce energy in places where other energy sources are not available.

Physical chemistry in medicine, manufacturing, and food quality control
Tomáš Navrátil’s research group has been focusing on removing the key shortcomings of the polarographic method. They have replaced the environmentally unfriendly mercury droplet previously used in polarography with advanced nanocrystalline materials. They have also increased the accuracy of the analysis of biologically important substances such as blood, cerebrospinal fluid, and urine. This has opened the way to a whole range of applications in medicine, including the diagnosis of cancer, Parkinson’s disease, or depression.

Patrik Španěl’s research team is focused on developing a different analytical method – so-called mass spectrometry. They have developed a device that makes it possible to immediately and precisely determine the level of volatile substances in gases. It can predict the development of a number of diseases of the digestive tract through the chemical analysis of human breath. It also allows the precise measurement of the amount of ingested alcohol. “It is a highly sensitive method, capable of detecting a single millilitre of a substance in the volume of an Olympic-size swimming pool,” Petr Krtil adds.

Patrik Španěl from the J. Heyrovský Institute of Physical Chemistry of the CAS (centre)

The device will find its use in medicine and beyond. It’s been designed to work around the clock, offering possible uses in manufacturing processes, chemical plants, or, for example, in food quality control.

Chemistry helping protect historical monuments
The presentations of projects at the conference were rounded off by technologies that can be used to protect and restore historical and cultural monuments. A team led by Jiří Rathouský, who develops advanced nanomaterials, prepared gels and emulsions that are used for the gentle treatment of the surfaces of artworks and can be tailored to specific materials. They are effective in removing dirt from stone sculptures, metal, glass, ceramics, and oil paintings. The project was previously awarded second place by the jury at the Czech Transfera Technology Day 2021 competition. 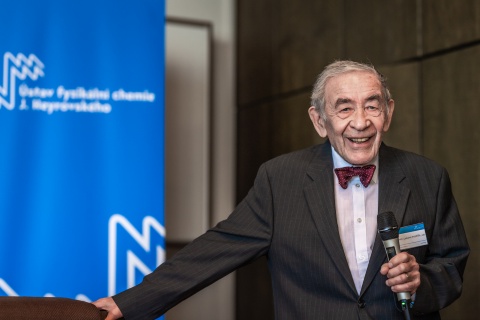 Lubomír Pospíšil from the J. Heyrovský Institute of Physical Chemistry of the CAS

Presenting (or shedding light on) the potential of new discoveries is an important part of scientific activity. “[Czech chemist and inventor] Jaroslav Heyrovský himself placed great emphasis on innovation. He would always look for all kinds of ways to apply the results of his research in practice,” recalls Lubomír Pospíšil from the J. Heyrovský Institute of Physical Chemistry of the CAS in regard to his former colleague, who was awarded the Nobel Prize in Chemistry. According to Pospíšil, the founder of polarography himself was behind the spread and implementation of polarograph, as he established collaborations all over the world. “The spirit of overcoming barriers between science and its application is carried on at the Institute of Physical Chemistry to this day,” Pospíšil concludes.

Text and photos are released for use under the Creative Commons license.