In the coming years, the Czech energy sector will be defined by the global geopolitical situation and the related search for alternatives to natural gas as well as the development of nuclear resources. A consensus was reached for the most part by representatives of the scientific community and other sectors at a seminar entitled "The Current Tendencies of the Czech Energy Sector", organised by the CAS Energy Research Committee and the Environmental Committee.

The volatile energy market is currently being affected by how rapidly the situation on the continent is changing. Particularly as a result of the conflict in Ukraine, it is becoming clear how much political and economic power is held by producers and exporters of fossil fuels, especially of natural gas. According to the plans of the EU, natural gas was supposed to replace coal in the coming years as one of the main sources of heat and energy. It was to be a cleaner and more environmentally friendly resource.

The planned decarbonisation of the energy sector was projected to be completed in 2040. However, it now appears that there may be a partial delay or, rather, deceleration of the transformation efforts. The fight against carbon dioxide is falling by the wayside, heralding an era of energy pragmatism.

A change in energy management is needed
Today, the Czech Republic exports over 10 TWh of surplus electricity annually. Fossil fuels are used substantially for its production. “What’s up for debate is whether we should change the very way our electricity is managed. The fact that we export it cheaply and then buy it at a high price,” said Radim Šrám, President of the CAS Environmental Committee, at the beginning of the seminar.

Pavel Šolc from the ČEPS company (the sole Czech transmission system operator) has pointed out that in the next few years, it will actually become necessary to import electricity to the Czech Republic. “The entire European infrastructure is critically unprepared for the termination of gas supplies from Russia,” Šolc said. He also stressed that, apart from households, natural gas is especially important for Czech industry and there is not enough time for a radical transformation of the heating sector.

Coal as a transitional fuel source
As recently as last year, EU plans called for a gradual replacement of coal. Countries were to move towards renewable resources. Natural gas was among the so-called transitional fuels that were supposed to facilitate this trend. The European Green Deal initiative by the European Commission (the Green Deal for short) envisioned a shift away from coal, which would have temporarily resulted in a higher level of dependency of the European energy sector on suppliers of natural gas, forty percent of which has been supplied by Russia. 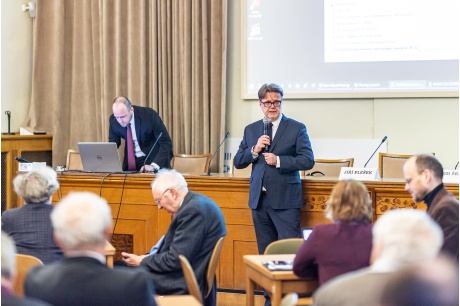 “The Current Tendencies of the Czech Energy Sector” seminar was moderated by the President of the CAS Energy Research Committee, Jiří Plešek. (CC)

Jan Rovenský from the Czech branch of Greenpeace pointed out that keeping the Czech energy sector free of Russian gas will not be painless. “In the last two months, the EU has sent more money to the Russian Federation for supplies of fossil fuels than it has sent in aid to Ukraine,” he noted, adding that the Czech Republic has no strategic plans to cope with short-term intense outages of primary energy sources, nor is it prepared for any long-term crises. The main conclusion of his presentation at the seminar was that the government-approved end of coal in 2033 is still a manageable goal even with a complete cut-off from Russian fossil fuels. However, the key to achieving such a scenario is to address the energy security of the EU collectively and in solidarity, all under the conditions of a common market, and not to attempt to solve, as up to this point, the energy self-sufficiency of 27 individual states.

Experts agree that if decarbonisation is to slow down, cleaner technologies will have to be found for extracting energy from coal. However, according to Pavel Šolc, it will not be possible to implement these technologies in time. “Nobody will want to build new cleaner coal power plants if they will only be used as a temporary measure for ten years. The Czech Republic will keep the current ones in use,” he summed up in his presentation.

The atom: a symbol of self-sufficient energy
How to obtain energy has always been a sensitive subject. “The role of nuclear energy is an even more controversial topic,” noted Dana Drábová, Chairperson of the Czech State Office for Nuclear Safety. “Now, additional concerns about political security issues and fear of possible exploitation by the military have been raised,” she noted, summarising the issue of nuclear power plant development in the Czech Republic.

Obstacles include negative reactions from the population, mainly regarding the disposal of nuclear waste. However, Dana Drábová stressed that nuclear power is a low-emission source, comparable to renewables. According to her, it is also a safe source. Comparatively, nuclear energy also has fewer casualties per unit of electricity produced than renewables and significantly fewer than in the case of fossil fuel sources. 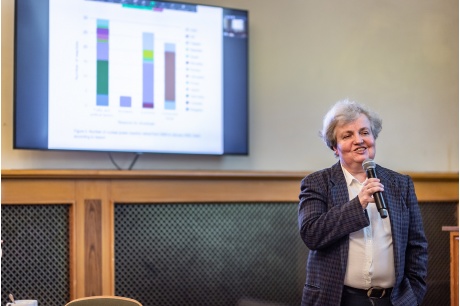 According to Dana Drábová, in addition to the completion of Dukovany, it is necessary to invest in the construction of smaller modular reactors. (CC)

As a result of political decisions, the share of electricity production from fossil fuel sources has remained virtually unchanged since the 1980s, but the share of nuclear power has been in decline since the late 1990s. The expansion of fossil power plants and renewables has thus limited the importance of nuclear power. However, as a result of the current energy crisis, it is making a comeback and is being included in the plans of individual European countries.

Dana Drábová also considers it necessary to increase the independence of the Czech energy sector. “We need to solve obstructions on the way to nuclear power and to complete Dukovany as soon as possible,” she said, pointing out, however, that the Czech Republic cannot rely 100% on nuclear power either and that a balanced mix of energy sources is needed for a healthy and efficient energy sector. “The first priority is to focus on our energy self-sufficiency and ensure the energy security of our country,” commented Vladimír Wagner from the Nuclear Physics Institute of the CAS.

New methods, research, and technologies the way to overcoming the crisis
The energy sector is beset by uncertainty, which is affecting long-term plans and consumer prices alike. The impact is felt by all sectors of industry and trade as well as research institutes. 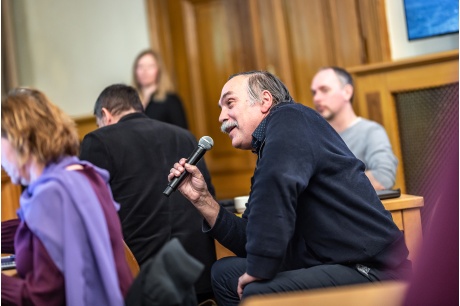 According to Vladimír Wagner from the Nuclear Physics Institute of the CAS, it is only possible to shut down coal-fired power plants once low-emission replacements have been arranged. (CC)

Reducing natural gas consumption and dependency has now become a Europe-wide priority. The ways forward should be planned by a government-led, long-term and expert discussion. But such a discussion is lacking in the Czech Republic. “Until a few years ago, the energy sector was less in the public eye. Today, it is the center of all attention,” noted Tomáš Smejkal from the Czech Ministry of Industry and Trade, pointing out the five-year plan initiated by the current government, which aims to reduce fossil fuel imports from Russia while increasing the country’s energy self-sufficiency.

Tackling energy dependency will also be one of the key priorities of the Czech Presidency of the Council of the EU, which is set to commence on 1 July 2022. One of the areas that the Presidency will focus on in terms of science and research is energy security and sustainability. “The war in Ukraine and the energy crisis have highlighted the need to seek scientific and technological progress in this sector and to approach it from a rational and scientific standpoint,” Vladimír Wagner summarised, adding that ensuring the energy security of the Czech Republic will be no easy task. “We must ensure the protection of our environment in the process,” he concluded.

The text and photos labelled CC are released for use under the Creative Commons licence.