In the years to come, one of the priorities of the Czech Republic is to become a European leader in science and research. This is also why the Czech Academy of Sciences will play an active role in the Czech Presidency of the Council of the European Union. The proposed objectives and more were presented by the 59th session of the Academy Assembly, which took place at the National House Vinohrady in Prague on 20 April 2022 in the presence of Prime Minister Petr Fiala and Minister for Science, Research and Innovation Helena Langšádlová.

The Czech Presidency of the Council of the EU is set to begin on 1 July 2022. The participants of the Academy Assembly therefore also got acquainted with the three areas that the Czech Presidency wishes to focus on in terms of science and research.

The first of these responds to the anticipated difficulties associated with food shortages and the ongoing climate change. At the same time, it builds on recent breakthroughs in molecular genetics leading to advances in targeted genome editing of agricultural crops.

The second area focuses on the development of low-emission and safe energy solutions, with an emphasis on clean nuclear energy. The strategy is suggested in reaction to one of the most pressing issues across Europe today.

The presented priorities tie in to the Strategy AV21 research programmes of the CAS and respond to specific challenges of the world today. “There is a need to ensure food security, but also sustainable energy – both for a society that will be self-confident, self-sufficient, and competitive, that will be resistant to crises which are yet to come,” Eva Zažímalová, President of the CAS, explained the unifying idea behind it all.

The CAS lending a helping hand to Ukraine
Aid to Ukraine was also on the agenda of the Academy Assembly. Speakers praised the wave of solidarity individual CAS institutes have shown so far towards refugees fleeing the war. David Honys, a member of the Academy Council of the CAS, stressed the importance of unequivocal rejection of aggression. In his opinion, the termination or at least suspension of cooperation with state institutions of the Russian Federation also constituted a significant gesture. The Academy Assembly expressed support for all implemented forms of aid. 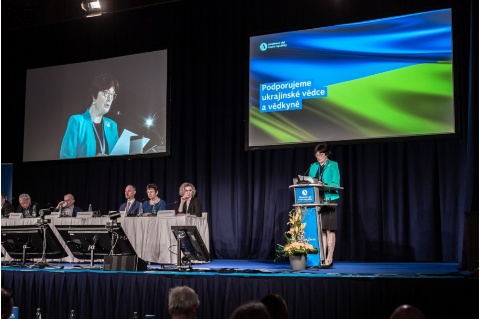 The Academy Assembly supported the position of the CAS in regard to the war in Ukraine and commended the aid provided to researchers fleeing the war.

The Researchers at Risk Fellowship programme enables Ukrainian researchers threatened by war or persecution to continue their work. It plans on supporting at least fifty researchers by the end of 2023. As of 12 April 2022, the Academy Council has already approved the first 22 applications.

The Academy Council also previously approved an extraordinary increase of 50 million CZK for the Excellence Support Programme for Prospective Employees. CAS institutes can use these funds specifically to help prospective employees from Ukraine, and not just researchers.

A bigger budget for Czech science
The unexpected hike in energy prices has also impacted the management of CAS institutes. Compensation should be provided by the budget increase proposal that the Czech government submitted to the Chamber of Deputies. Its approval means a year-on-year increase of about 300 million CZK for research institutes. This year, for the first time, the CAS will receive more than 7 billion CZK from the state budget. 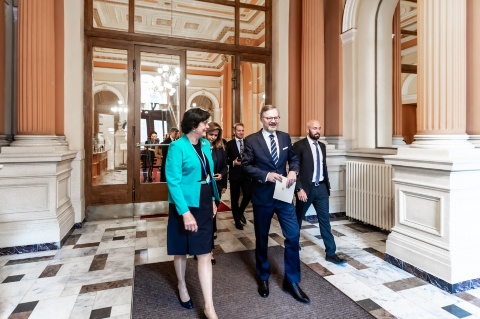 Prime Minister Petr Fiala also praised the amount of funds invested into Czech science. “One of the priorities of our government is to support science and innovation,” he said. “Education and first-rate scientific research are the best course for the future of our country. We do not want to make the mistake of neglecting these key aspects.”

According to Eva Zažímalová, President of the CAS, the stance and actions of the government are promoting edification in the country. “Reliable and, above all, predictable funding is a necessary condition for Czech science and research to rank among the best in Europe,” she noted. “I am convinced that the Academy is well-equipped for this in the form of its research facilities and human potential.”

Pavel Baran, President of the Science Council of the CAS and First Deputy Chairman of the Research, Development and Innovation Council, stressed that research funding must not be underestimated, as scientific research is able to respond to pressing issues of the contemporary world and offer solutions. “It is our duty to look beyond the current complex circumstances and perceive the strategic importance of investing into this sphere,” he noted. The text and photos are released for use under the Creative Commons licence.