Two new high-energy gamma-ray Cherenkov telescopes are now observing the skies from the observatory of the Astronomical Institute of the CAS in Ondřejov, Czech Republic. The largest optical telescopes in the country, they are currently focusing their attention on the Crab Nebula. After completing a trial run, plans are to move the telescopes from Ondřejov further away from civilisation to higher altitudes in South America.

At the observatory in Ondřejov, two identical telescopes are observing some of the highest-energy photons emitted in space, i.e., particles of light produced during very turbulent processes following supernova explosions or near neutron stars and black holes. The telescopes focus on detecting Cherenkov radiation.

“High-energy particles of light, photons, first collide with atoms within our atmosphere about 20 kilometres above the Earth’s surface, and gradually a cosmic ray shower starts to form, which contains a lot of Cherenkov radiation – bluish visible light,” explained Michal Prouza from the Institute of Physics of the CAS.

Currently, the telescopes, located 190 metres apart, are simultaneously focusing on the same spot in space, the brightest source of high-energy photons: the Crab Nebula, which is used to test all new telescopes. The nebula is the remnant of a supernova known to contain high-energy particles.

A cone of Cherenkov light can be examined from two different angles by astronomers in Ondřejov. Stereo measurements make it possible to reconstruct with much greater precision where the photon originated and its original energy level. “Our main goal is to understand how cosmic photon sources work that have an energy level of around one teraelectronvolt, which is about a trillion times higher than photons of visible light have,” explained Petr Trávníček from the Institute of Physics of the CAS.

The telescopes are comparable in quality to the instruments that will be used at the world’s most sensitive high-energy gamma-ray international observatory, the Cherenkov Telescope Array (CTA). The telescopes at Ondřejov are currently in test mode, with scientists monitoring whether all components are in working order. Both telescopes have already managed to detect “first light” cosmic ray air showers. The telescopes are to remain in the Czech Republic through 2024.

“After the testing of the telescopes is completed here in Ondřejov, the instruments will be transported definitively to a much higher altitude in South America, where they will form a whole array of Cherenkov telescopes with others of their kind,” revealed Michal Bursa from the Astronomical Institute of the CAS. 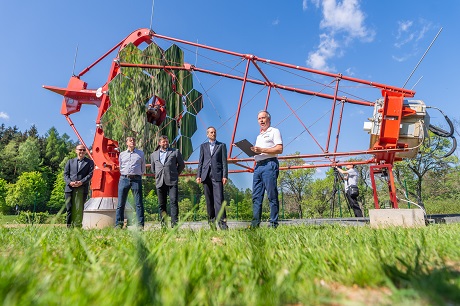 The complex design is the work of the SST-1M consortium: several institutions from the Czech Republic, Poland, and Switzerland. In addition to the Institute of Physics and the Astronomical Institute of the CAS, the Palacký University in Olomouc, the Henryk Niewodniczański Institute of Nuclear Physics of the Polish Academy of Sciences, and the University of Geneva are also involved in the project.