Parasitic fish are learning how to trick their hosts

Taking care of a family is hard work. Not only are cuckoos well aware of this, but some species of fish are as well – for instance, catfish found in Lake Tanganyika in Africa. They prefer to leave the care of their offspring to others, perfecting their strategy for tricking the hosts over the course of their lives. The learning process of the cuckoo catfish has been described by researchers from the Institute of Vertebrate Biology of the CAS. Their findings were published in the prestigious scientific journal Nature Communications.

The biologists observed the behaviour of these parasitic fish in captivity and in their natural habitat – Lake Tanganyika in Africa. “Brood parasitism is studied in birds such as cuckoos. We chose the cuckoo catfish – the fish equivalent of cuckoo birds – which parasitise fish with highly evolved parental care, so-called mouthbrooders,” explains Martin Reichard, head of the research team of the evolutionary ecology of fish at the Institute of Vertebrate Biology of the CAS.

The Queen of Hearts Principle
Female mouthbrooding cichlids take care of their young in their own buccal cavity. The cuckoo catfish takes the first opportunity it gets when a mouthbrooder opens its mouth to slip in its own eggs. This is an advantage for two reasons – the eggs of the parasitic fish are safe in the mouthbrooder’s mouth and have the assurance of a snack from the get-go. This is because the little catfish hatch before the host’s offspring do and begin to feast on their step-siblings. The cuckoo catfish in its natural lake environment

Parasite and host animal species lead a long-standing struggle over who gets to eat whom. They co-evolve together and influence each other. “This coevolution works according to the Queen of Hearts principle, modelled on the character from Alice in Wonderland. In one chapter, the Queen explains to Alice that in order to stay in place, she must run as fast as she can. A similar race takes place between the host and the parasite. Both run as fast as possible to keep the other from escaping them, and both end up actually staying in the same position,” Martin Reichard says.

Biologists have previously proven that hosts spend their lives learning to defend themselves against brood parasites, trying to “escape” them. Now they have found that parasites are also adapting and catching up with their hosts. This “arms race” occurs on two levels: evolutionary – on the level of hundreds or thousands of years, and individual – during the lifetime of each individual.

What exactly do cuckoo catfish have to learn then? The hardest part is finding the right moment to insert their eggs into the mouth of a mouthbrooding cichlid. “The first attempts of the cuckoo catfish to parasitise their host are almost always unsuccessful, either trying too early or too late. It is only after several months of the trial-and-error method that the catfish begin to reap the sweet fruits of reward,” explains the co-author of the study, Radim Blažek, also from the Institute of Vertebrate Biology of the CAS.

The expedition to Lake Tanganyika
For their research, the biologists made use of both the newly reconstructed fish farms at the institute in Brno and their findings from direct observations in the wild. Mid-April, Martin Reichard’s team returned from a month-long expedition to Zambia, where they conducted research on parasitic catfish found directly in Lake Tanganyika. 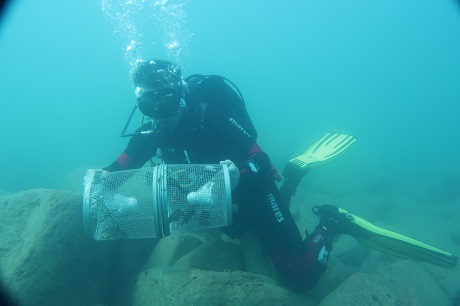 The researchers dived in the lake, catching and observing the fish in their natural habitat. “It’s ideal to combine experiments with fish in captivity and observations made in the wild. Neither part alone would have been sufficient to answer our questions,” adds lead study author Holger Zimmermann.

Current research of parasitic catfish is being conducted as part of Martin Reichard’s five-year project The role of coevolution ecological speciation, which was successful in the prestigious EXPRO grant competition of the Czech Science Foundation and will run from 2021 to 2025.