Science is not just about lab coats, long equations, complex graphs, and detailed studies. It can also give rise to unique moments and unsuspected beauty. The Czech Academy of Sciences employees captured the aesthetics of science in their photos and videos as part of the in-house Photogenic Science contest. The winning entries are now on display at the CAS headquarters on Národní Street in Prague, where visitors can behold the captivating world of research at the Věda fotogenická (Photogenic Science) exhibition.

The annual Photogenic Science contest is open to CAS employees, who can send in their science-themed entries. In addition to the traditional main category, a second category is announced every year with a new theme, this year’s ninth edition being “Scientists and their adventures”. In an additional special category, participants could, for the first time, also submit videos. The prizes were presented at the opening ceremony on 29 November 2022 by Eva Zažímalová, President of the Czech Academy of Sciences, Markéta Pravdová, member of the Academy Council of the CAS, and the vice chair of the Věda žije! forum, Michael Komm.

“The photographs are used to compile the yearly calendar of the CAS, which always has great success with our collaborators. The images have captions in both Czech and English, so the calendars can be gifted to ambassadors, for instance. I also always choose a photograph from the selection for my personal season’s greetings card,” Eva Zažímalová noted, highlighting the “afterlife” of the photographs following the competition.

Aluminium has moved house to the Science and Art Gallery
The winner of the main category, “Photogenic Science”, was the photo “Reaction of bromine with aluminium” by Jan Havlík from the Institute of Organic Chemistry and Biochemistry of the CAS. “Students who attend the chemistry club at our institute were responsible for choosing the photograph. This particular chemical reaction is their favourite because of all the fire and smoke it produces. Given the success of the reaction with them, I decided to enter it into the competition – evidently, enthusiasm for science transcends generations,” Jan Havlík explained the inspiration behind the winning image. 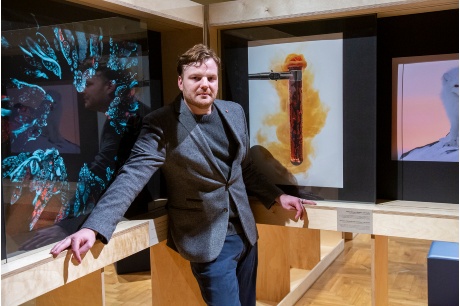 Jan Havlík with the winning photo on his left, capturing the reaction of bromine with aluminium.

The adventures of photography
In the “Scientists and Adventure” category, the prize for the best photograph went to Roman Garba from the Nuclear Physics Institute of the CAS, who named his snapshot “Mad Max in Mauritania”. “The image pictures a freight train carrying iron ore that always stops in one particular place. The locals already know of this, so they make use of the opportunity, jump on the train, and hitch a ride to the coast,” the author noted, describing how he found himself aboard the winning train.

Newly, the jury awarded the best photographs in three research areas: (1) Mathematics, Physics, and Earth Sciences, (2) Life and Chemical Sciences, and (3) Humanities and Social Sciences. The special categories were awarded with the prize of the Academy Council of the CAS, and the moderator announced the results of the online voting on the Photogenic Science Instagram (video) and Facebook of the CAS (photo). The “people’s choice” award went to the “Jupiter retort” photo by Natália Gira from the J. Heyrovský Institute of Physical Chemistry. Employees of the CAS also submitted a total of twelve videos, with the most popular one being “Lightning vessels” by Roman Dvořák from the Nuclear Physics Institute of the CAS.

A new dimension
“Thanks to your cameras, we have the opportunity to witness your take on science, scientific events, and the daily routine and work of researchers, without which the photos would not have taken on such a beautiful form,” concluded Markéta Pravdová in her thank-you speech.

The Photogenic Science project, organised by the Centre of Administration and Operations of the CAS, is the brainchild of the Věda žije! forum, aimed at improving public outreach and the promotion of activities of the CAS. The final ranking of the three best photographs in the main and secondary categories was compiled by an expert jury out of the 244 entries by 90 authors. You can view all the images submitted to the contest here. A group photo of all the awarded contestants, the jury, and representatives of the Academy.

The jury also selected twelve photos for the official 2023 calendar of the Academy and 30 images which can be viewed at the Photogenic Science exhibition at the CAS headquarters (at the Science and Art Gallery) on Národní Street from 30 November 2022 to 31 January 2023, open Monday to Friday, 10 AM to 6 PM.