The COVID-19 pandemic, which broke out more than two years ago, clearly demonstrated the critical importance of science and research. It also revealed how important active communication and information sharing between research institutions is. In order to better manage future emergencies related to sudden infections, the National Institute of Virology and Bacteriology (NIVB) is being established in the Czech Republic.

The project will not comprise a new research institute being built, but instead a robust research network made up of three dozen different institutes and research teams. The National Institute of Virology and Bacteriology (NIVB), financed with 1.3 billion CZK from EU funds, involves teams from the Czech Academy of Sciences, Charles University in Prague, Masaryk University in Brno, the University of Chemistry and Technology in Prague, and Palacký University in Olomouc.

In recent months, the President of the CAS, Eva Zažímalová, has called for the need to establish a “virology centre” in the Czech Republic, one which would play a similar role as the German Robert Koch Institute. Although the newly established institute is “merely” a network and not a full-fledged institution, Eva Zažímalová welcomes this as an important first step.

“I believe that this will comprise the initial stage for the creation of a national institute which will focus not only on research on infectious diseases and the development of new drugs for treatment, but also more broadly on the impact of these diseases on society, prevention, and modelling of possible crises developments,” Eva Zažímalová said on 21 June 2022 at the press conference regarding the founding of the NIVB. 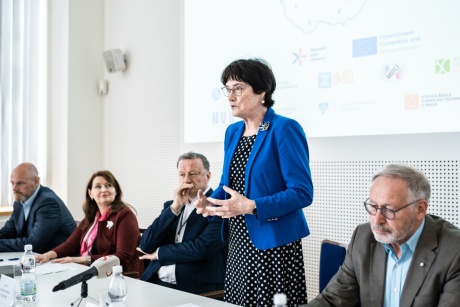 Czech Academy of Sciences President Eva Zažímalová speaking at the press conference regarding the founding of the National Institute of Virology and Bacteriology.

Better integration and sharing of information
The NIVB aims to connect researchers and improve the coordination of their capacities in tackling emerging epidemics. The role of the institute will be to provide expert opinions and advice to the country’s leaders, which is key to an effective response in the event of potential new epidemics.

NIVB research will focus on three main areas. The first is the study of interactions between viruses or bacteria and their hosts – for instance, understanding the mechanisms by which viruses and bacteria multiply in infected organisms and cause disease. The second area of research is the study of the immune response of the infected organism and innate and acquired immunity against pathogens. The third area is the research and development of new diagnostic tools and drugs for the treatment of infectious diseases.

The Institute of Organic Chemistry and Biochemistry of the CAS will be the main coordinator of the NIVB. As its director, Jan Konvalinka, explained, “COVID-19 has shown very vividly and painfully that epidemics have the potential to turn our advanced society and way of life upside down. It also revealed that in the Czech Republic, though we do have top research teams engaging in world-class research, we lack an overarching platform that would connect them all, facilitate cooperation, and provide expert recommendations to politicians or authorities in charge of necessary measures.”

“That is why I am delighted that such a visionary platform is finally emerging that will be able to integrate research in this area, and I am proud that our Institute is coordinating the new project,” he added. 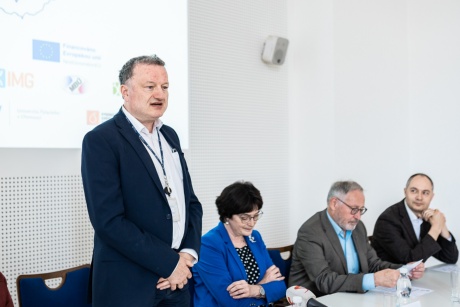 Jan Konvalinka, Director of the Institute of Organic Chemistry and Biochemistry of the CAS

Prepared by: Leona Matušková, Division of External Relations, CAO of the CAS
Photo: Shutterstock; Tomáš Belloň, Institute of Organic Chemistry and Biochemistry of the CAS