Her father was a distinguished mathematician, she is following in his footsteps. Šárka Nečasová heads one of the most successful departments at the Czech Academy of Sciences (CAS) – at least in terms of the number of obtained Academic Awards (Praemium Academiae), the most significant CAS grant. She is interested in modelling fluid mechanics, solid dynamics, fluid–solid interactions and interactions with their environment. What type of projects is the mathematician currently working on?

The stalled opening of the Nord Stream 2 pipeline, the embargo on Russian oil. How will fossil fuels get into Europe? It is no easy feat to design an oil or gas pipeline and get the whole system to work well, so that the fluid flows properly, there are no back eddies, turbulence, or too much tension or pressure at any point. Or, consider this scenario: a surgeon is conducting a bypass surgery on a patient – how to do it while avoiding problems with blood flow? And how does it work with an artificial heart? Lastly, how does air flow around an aircraft component and what does it have to do with noise?

What connects these examples is the physics of fluid flow. Engineers who design various components for companies use computers to investigate whether their designed system will work properly. Whenever they design a new component, they use computer models to investigate how it will behave – how air will circulate around the component, for example, in the aerospace industry. Sometimes they test it out in a wind tunnel, measuring whether reality matches the pre-calculated values the software provides. But someone has to develop and design that, too – and it is the mathematicians who are involved in making sure the calculations of such a program make sense.

When investigating how a certain object behaves at extreme speeds or when larger systems are being designed, conducting measurements in a simulated situation is not at all easy and often there is no choice but to rely on pure calculations. An aircraft, an oil pipeline, or an artificial heart simply have to be manufactured and tested out in practice. Human lives depend on the accuracy of the calculations. But if the software is to deliver the right data, it needs its mathematical apparatus to work properly – to approximate reality as much as possible and to preserve the laws of nature, such as the law of conservation of energy. And also for us to know whether the solution is unequivocal or not.

Because if there was more than one possible solution, the software might choose the mathematically correct solution but in practice, the consequences could be disastrous. A building could collapse, a bridge could fall... Certain complex systems of equations can have infinitely many solutions. The Department of Evolutionary Differential Equations at the Institute of Mathematics of the CAS, headed by Šárka Nečasová, focuses on how to design and solve equations describing fluid flow, how to describe and quantify the solutions via mathematical analysis, and how to find numerical solutions.

Evolution for one million
When someone says ‘evolution’, people often think of the evolution of species, of gradual change. The same holds true for mathematical equations. “It describes an action, a process. It is not a stationary system, but rather contains time-dependent elements – as in the case of estimating the weather forecast,” Šárka Nečasová explains.

The weather forecast, but also the way people flee from a crowded stadium during a fire – such processes can also be modelled mathematically based on the Navier–Stokes equations, which describe the motion of viscous fluid substances. These are quite complex differential equations. Discovering their so-called smooth solution is one of the Millennium Prize Problems, with a one-million-dollar award being offered for a solution or counterexample. These famous equations are then used to solve special cases, some of which researchers have already solved.

Researchers at the Institute of Mathematics of the CAS are looking for solutions primarily in regards to compressible fluids (gases) and their interaction with solids. Examples include the flow of air around an object, such as the contours of an airplane or gas in a pipeline, but also the propagation of noise inside a machine component. The equations get more complex the closer you try to approximate reality. It is possible to figure in energy exchange with its environment, elasticity, temperature, and various other factors. And with each factor, the equations become more difficult to solve. What can then happen is that you are unable to find a solution or it doesn’t yield relevant results. Even a tiny error becomes all too apparent...

Fluids can be compressible (gases) or incompressible (liquids). There is also a difference between Newtonian liquids (such as water) and non-Newtonian liquids, which in certain situations behave differently (like in the case of honey or ketchup). “We are also interested in the interactions with the surrounding environment – what does the fluid do at the boundary with a solid or elastic wall, in reaction to different boundary conditions, what role does the geometry of the shape play... We are looking at all of this,” Šárka Nečasová adds.

Current challenges
Šárka Nečasová is only the second woman to have received an Academic Award (Praemium Academiae) – a generous grant aimed at supporting excellent research within the CAS. Moreover, the funding of up to five million crowns over six years promises minimal paperwork in comparison to other grants. Its purpose is to encourage undisturbed research by top teams. So what will the mathematicians be focusing on? As part of their theoretical research into modelling fluid flow, they are looking at questions of contact with the boundary – whether it consist of a rigid substance or an elastic one. 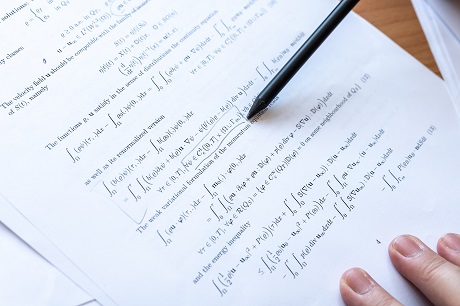 Mathematics is the queen of sciences upon which human lives depend.

An example of a mathematically complex problem is that of solids coming into self-contact. If, say, blood is flowing through a blood vessel, does it ever happen that its walls touch and separate again? So far, it has been proven that in cases where the Dirichlet boundary condition holds true (the fluid has zero velocity relative to the boundary), no contact occurs. However, only on condition that there is high smoothness and incompressibility.

Or take another example. You have solid matter that has a cavity in it which is filled with a liquid. The whole system is rotating. The international team of researchers has proven that such a system will eventually become stable – it will cease to be time-dependent. “We have achieved the same thing in collaboration with the eminent researcher, G. P. Galdi, for a cavity filled with a compressible fluid, i.e., a gas. It settles into a permanently rotating equilibrium system. Moreover, it is independent of both the shape of the solid and the properties of the fluid,” Šárka Nečasová explains. “This means that the so-called Zhukovsky hypothesis has been confirmed.”

Math in practice
But the Praemium Academiae will not just go towards theoretical research. Regarding more practical areas, researchers in the Evolutionary Differential Equations department are looking at models of blood clotting, the flow around artificial heart pumps, and turbulence in the blood, or, for instance, voice analysis, where they try to mathematically simulate contact on the surface of the vocal cords.

For mathematicians to get closer to math in practice, they need to find common ground with engineers. From first encounters to the practical application of their results, the process usually takes years. “In the Czech Republic, it used to be almost impossible to find a partner or sponsor from within the industry sector. That has changed, and we’ve now begun to cooperate with Doosan Bobcat, one of our PhD students is working with the company. Additionally, one of our team members and a PhD student are working together on a blood pump simulation with researchers in Lisbon,” Šárka Nečasová notes.

Nowadays, cooperation is especially important. In science, doubly so. To the layperson, mathematics may seem like a solitary job where everyone is working on their own thing, but in reality, even mathematicians have to collaborate on problems. “Ironically, the pandemic was of help to us in this regard. We meet with colleagues that are abroad regularly and frequently, although mostly online,” Šárka Nečasová says. “As part of our aid to Ukraine, we’ve hired two Ukrainian colleagues, whom we are trying to support as much as possible.”

Before, there was also ongoing scientific cooperation with Russia. But the war changed everything. At the beginning of the conflict, a number of Russian mathematicians with whom the Czech researchers worked signed an appeal to President Vladimir Putin to end the war. “I have no news of where they are today,” Šárka Nečasová adds sadly. And so joint projects with Russian mathematicians, who are traditionally very good, are currently on hold – as are many of the oil and gas pipelines mentioned in the introduction, including Nord Stream 2.

She focuses on the mathematical modelling of fluid flow and solving partial differential equations. Having worked at the Institute of Mathematics of the CAS since 1995, she has been the head of the institute’s Evolutionary Differential Equations department since 2010. She is a recipient of the Otto Wichterle Prize (2003) and the Academic Prize (2021). She is a member of the Learned Society, the Union of Czech Mathematicians and Physicists, and the Gesellschaft für Angewandte Mathematik und Mechanik.

The article (in Czech) can be found in the Czech issue of the CAS magazine A / Věda a výzkum.

The text and banner photo are released for use under the Creative Commons licence.