What comes to mind when you picture a hacker? Is it a cybercriminal who never leaves any tracks, always works alone, and avoids the spotlight? This stereotypical image belongs more to the realm of movies than reality. The digital world is becoming increasingly interconnected with the real one, and hackers have become a regular part of it. Not necessarily always harmful, either – hackers are often employed or their services used by companies and governments alike. Their activities are sometimes driven by great ideals. So where can we find hackers working for the good of society, and what is the role of hackers in current forms of hybrid warfare?

A hoodie-clad person sits in a dark room with no windows, illuminated only by the glow of several monitors, surrounded by super-modern computer equipment. On the web, they can do whatever they want. They always work alone. That’s what a hacker may look like in many of our imaginations. But this picture is far from the truth – just like when we think of a hacker as a typical criminal who only cares about doing harm. Yes, most of them fall into this category, but there are many exceptions. The world of hacking is not entirely black and white.

The good, the bad, and the ugly
We can differentiate between hackers according to their motivations. Cyber criminals whose only true concern is self-interest and enrichment are called black hat hackers. They steal valuable data to sell it on the black market or the dark web for the highest price. They can block services and platforms such as Facebook, Twitch, or Netflix and demand high ransoms in return for access.

The dark web is that part of the internet which is not indexed by web search engines like Google. You cannot access it without a specific browser or authorisation. The dark web is unregulated, so many sites are illegal. This is where hackers most often sell their services, programs, and stolen data.

At the other end of the hacking spectrum we have white hat hackers, or ethical (security) hackers. They use penetration testing to expose vulnerabilities in systems, looking for weaknesses and ways to exploit flaws in (software) code. But this type of hacking does not cause damage. While the tools of white hats are the same as those of criminal hackers, they use them exclusively for good causes. “Ethical hacking is very important for cybersecurity. We can use it to verify that our security features and settings are up-to-date and sufficient,” explains Ladislav Beneš from the Institute of Computer Science of the CAS. In the Czech Republic, the National Cyber and Information Security Agency monitors and protects against hacker activities.

A penetration test is a simulated cyberattack on a network or computer system during which an ethical hacker tries to breach the system’s security. The aim of the test is to identify potential weaknesses of the system and assess how effective the security measures would be in the event of a real cyberattack.

Ethical hackers are frequently employed by businesses such as tech companies or banks. Thanks to their work, for instance, the Visa corporation was able to discover a flaw in its contactless payment card system which thieves could have exploited, bypassing payment limits and extracting money from users’ accounts. Fortunately, the white hats were one step ahead of the criminals. 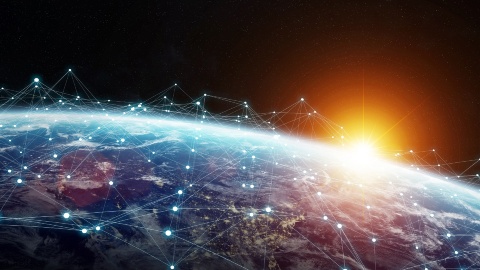 While modern technology connects us all, it also generates immense amounts of data about our activities on – and off – the internet. The challenge for white hat hackers is to keep that data from falling into the wrong hands.

We’ll find grey hat hackers somewhere in the middle. While they are not strictly concerned with personal gain and often have a wider agenda, they certainly do not always follow legal channels. For instance, they believe that all users deserve equal access to information, so they might steal data from companies – not in order to sell it, but to make it public.

Like other hackers, grey hats look for vulnerabilities in network security to slip through. By doing so, they often find loopholes to attack in order to force companies to improve their security measures.

This is also the case of Russian-speaking hacker Alexey, who “broke into” around 100,000 homes around the world four years ago – in his own words, it was to install better security for their WiFi transmitters. Even crazier is the incident from 2017 of an unknown hacker who remotely took control of about 150,000 printers in random households and had them print out one paper after another. This was intended as a warning to the rather confused users that a printer that was left accessible online could be exploited.

Hackers at the public’s service?
The most famous hacker group of our time is undoubtedly Anonymous. They openly subscribe to the grey hat movement and claim to be so-called hacktivists. The collective originated in 2003 and no one knows how many members it has worldwide. “Like in the case of other activist groups, we can sometimes agree and sometimes disagree with what they do. Similarly, we can evaluate the methods they use and the goals they advocate in different ways,” Ladislav Beneš notes.

Hacktivism constitutes the use of hacking as an effort to promote social change. Hacktivists strive to enforce freedom of speech, human and animal rights, or the right to information. They particularly target countries which suppress these ideals.

Fifteen years ago, Anonymous carried out a series of cyberattacks that brought the collective into the public eye. In 2008, they targeted the Church of Scientology in the USA, attacking and blocking its website. What’s more, like the previously mentioned unknown hacker, Anonymous attacked the Church’s printers. They sent the printers very long documents, which contained only black pages. The printers automatically printed them out and used up all the black ink.

Anonymous struck again in 2015, when the collective announced that it would reveal the names and contact information of about 1,000 members of the Ku Klux Klan, a white supremacist hate group. A few days later, it indeed published a list of 57 phone numbers and 23 email addresses of alleged KKK members. As a result, the crimes of several of the exposed Klansmen came to the attention of the media and later the police. 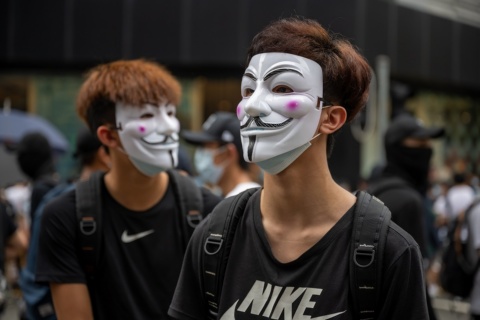 Guy Fawkes masks as a symbol of hacktivist movements: inspired by the English soldier who in 1605 attempted (and failed) to assassinate King James I and blow up the Houses of Parliament with his accomplices during the Gunpowder Plot and was subsequently executed.

But not everything Anonymous does is in the public interest; sometimes, their cyberattacks cause significant damage. When they attacked PayPal, an online payment company, in 2010, they made it impossible for people around the world to send online transfers for several hours. In their fight against governments and companies, censorship and regulation of the Internet, they often end up hurting ordinary users. “From a societal point of view, they are as problematic as other radical activists,” Ladislav Beneš adds. Just like with other grey hat hackers, then, these are no superheroes.

The hackers who have picked a side
The services of hackers have long been used by some countries to wage so-called hybrid warfare. Its effects can be seen, for example, in the conflict between Russia and Ukraine. The day before the Russian invasion of Ukraine in 2022, a cyberattack was carried out on Ukrainian government computers. Its aim was to wipe out the hard drives containing military defence plans so that the attacking army would have an easier task later. “Hacker groups are usually experienced in attacking government facilities and it is a military advantage for some countries to utilise their services this way. These attacks are usually reprehensible no matter who carries them out,” Beneš points out.

Hybrid warfare is a type of conflict in which tools such as terrorism, propaganda, psychology, and cyberattacks are used subversively. The aim is to weaken the adversary, create a crisis in society, and influence or take control of it by furtive means.

Anonymous, on the other hand, have declared cyberwar against Russia. They overloaded the official websites of the Russian government, intelligence services, and state television, which caused them to stop working. They even managed to take control of television broadcasts, broadcasting footage of Russian bombings of Ukraine for a full ten minutes.

None of this would have been possible if the hackers had worked alone. On the contrary – they actively cooperate and form well-organised, paid groups with a common goal. They do not work in anonymity, either; they are known within their communities by at least nicknames. Finally, being a hacker does not automatically mean being a cybercriminal. On the contrary, there are those who make sure that our digital worlds remain safe and sound.