New genome-editing techniques in plant breeding have the potential to feed the planet’s growing population. The need for innovation in food production is becoming increasingly more important in light of the ongoing war in Ukraine and climate change. However, the implementation of modern genome-editing techniques in practice is not yet permitted in EU countries, including the Czech Republic. Researchers across Europe want to change this. That’s why on 13–14 October, 2022, the Czech Academy of Sciences and EU-SAGE organised an international conference on genome editing for food safety and crop improvement in Prague within the context of the Czech EU Presidency.

For centuries, plant breeding has been helping humankind increase yields and improve crop quality. But traditional methods of plant breeding have long been out of step with climate and political change and with the pace at which the world’s population is increasing. Targeted genome editing of plants using so-called molecular scissors offers new possibilities. These enable changes and repairs with “surgical precision” to occur in the genome without actually inserting foreign genetic information into the plant.

“You can’t distinguish a plant bred by genome editing from a plant bred classically,” says Eva Zažímalová, biochemist and President of the Czech Academy of Sciences. “Genome editing constitutes a safe method and represents our hope for securing enough food for humankind in the future.” 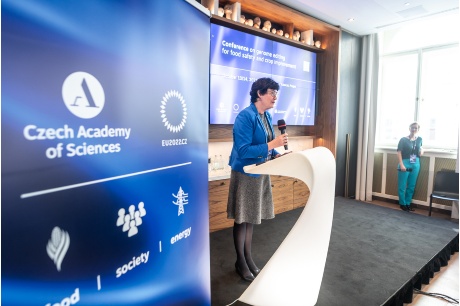 Eva Zažímalová, President of the CAS, delivers the opening speech at the beginning of the conference.

Genome editing also has an environmental dimension. In fact, it can help transform agriculture into a sustainable one – crops that are more resistant to drought or pests without the need to use an abundance of pesticides and fertilisers.

GPS for plant breeders
“If you have to find a certain house, you can use an old map and drive around for hours or get stuck in traffic, or you can use GPS which brings you immediately to where you want to be. This is the same thing – it takes you immediately to the change which you know is going to bring favourable traits for the plant,” explains Dirk Inzé, scientific director of the VIB-UGent Center for Plant Systems Biology, who is the chairperson of EU-SAGE (an organisation that brings together experts and institutes advocating for the use of gene editing for a sustainable agriculture). “In view of what is happening, e.g., climate change, this is really an important tool for plants and breeders,” Dirk Inzé adds. 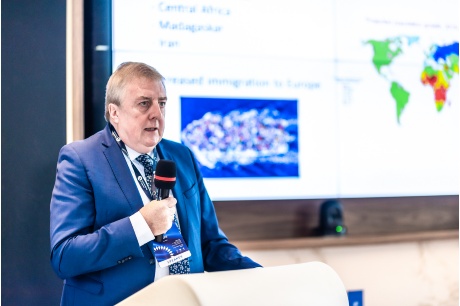 The method is already commonly used in agriculture in Japan, the USA, and Australia, but also in India, China, and South America. Following Brexit, the UK is also working on allowing gene editing. However, it continues to be banned in the European Union. It falls under the GMO category and is subject to rules that have not been updated in twenty years.

Will the EU allow gene editing?
Researchers are active in discussions with politicians in EU countries about the possible authorisation of new breeding methods. They present the results of their research which speak clearly in favour of gene editing. The gathering between representatives of science, politics, and European institutions took place in mid-October at the two-day conference on genome editing for food safety and crop improvement, organised by the Czech Academy of Sciences in the context of the Czech EU Presidency.

“We want to present the latest scientific findings and their application in gene-edited crops and discuss what impact they could have on the path to sustainable agriculture,” explains David Honys, plant geneticist and member of the Academy Council of the CAS.

The keynote speaker of the conference was Dirk Inzé, with contributions by members of the European Parliament and the European Commission as well as representatives of ministries and foreign universities. The Czech scientific community was represented by Eva Zažímalová, President of the CAS, Jaroslav Doležel from the Institute of Experimental Botany of the CAS, and others.

The conference, held in English, was livestreamed on YouTube and can be viewed below:

First day of the conference (13 October)

Second day of the conference (14 October)

The conference programme in PDF can be downloaded here.

Based on the initiative of MEP Michaela Šojdrová, a thematically related accompanying study entitled Genome-edited Crops: A European perspective was created. Its concrete form arose from the cooperation of EU-SAGE and a group of leading Czech experts on the given issue. The study reflects the outcome of the discussion on how to mitigate the impact of climate change on our agriculture, ensure food security and support the competitiveness of European farmers.