Research results can unintentionally, often inadvertently, serve a purpose different to the one that gave rise to it. Below, David Honys from the Academy Council of the CAS explains what the influence operations of foreign powers in science can look like and why it’s prudent not to underestimate them.

The Czech Academy of Sciences has long been one of the most active research institutions in the Czech Republic. Its institutes are open to cooperation with both domestic and foreign partners while also aware that they have to adopt security measures to counter potential influence operations and attempts at manipulation. Where do the boundaries of mutually beneficial cooperation lie and how can research institutes detect potential threats? We spoke with David Honys from the Academy Council of the CAS about trusted research and institutional resilience of the Academy.

Let’s introduce this in more general terms. How would you define a high-risk situation in terms of influence in research? How can we understand this term?

We’re starting more generally, but certainly not simply. I would almost say that this is the most difficult question to start with. The terminology used in security usually comes across as distant and unpleasant – as something from another, hostile world which we want nothing to do with. It usually prevents us from thinking more carefully about what these terms mean. To simplify, a high-risk situation can arise when a foreign power conducts undesirable and unacceptable practices directed against the freedom of research and the interests of the Academy and its professed values.

What could attract foreign powers to the Czech Academy of Sciences?

Our Academy is a top-tier research institution on a national as well as international scale. It covers a wide range of scientific disciplines and research areas, with our institutes producing a significant number of high-quality results. Of course, by doing so, they also attract unwanted attention. I’d like to note that this doesn’t concern only the well-known fields touching on strategic research. Interest in results that we wouldn’t have initially thought of can appear as well.

Does the danger of attempted manipulation vary depending on the researcher’s field?

The risk of compromise varies for different fields. However, this does not mean it’s zero-risk clear sailing for some of them. All researchers are at risk in some way, and believing we are not at risk and that our research is not of much interest to outsiders can be misleading or even dangerous. The level of interest of potential attackers can vary, and it is the other side, the foreign power, that decides what and who to target.

Could you give an example?

China, for instance, in its 14th Five-Year Plan ‘for Economic and Social Development and Long-Range Objectives through the Year 2035’ defines 15 priority areas that coincide with the activities of a significant part of our institutes.

What does this mean for us?

We must be aware of the risks involved and be ready to identify, manage, and eliminate them – ideally before the external influence can develop into a real threat. The CAS institutes and their management play an indispensable role in this. First, because the management knows its workplaces and facilities best, but mainly because of the decentralised structure of the Academy. Although it is the founder of the CAS institutes, they function independently as separate legal entities. The respective management is therefore responsible for analysing and reducing safety risks at the institutes. 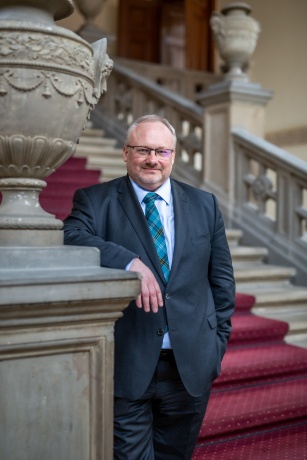 According to David Honys, Member of the Academy Council of the CAS, anyone can find themselves at risk of manipulation by a foreign power.

What forms of influence is it most common to encounter?

There are many forms and techniques of influence. Institutions as well as individual teams or staff can be targeted. Similarly, the identity of the potential attacker can vary. It doesn’t necessarily have to be a foreign intelligence service – the reality is often more prosaic. It can be a company with an interest in winning a particular contract, a lobbyist, or even a hacker who simply gathers intel for entertainment. This latter ‘agent’ cannot be underestimated – they can later monetise it if given the opportunity.

So what can an attempt at undue influence look like?

External forces usually do not target a specific person, but rather the information or power they have at their disposal. But the way to achieve that is through specific people and their weaknesses – and who among us has no weaknesses,
right? That is what the foreign power exploits and chooses the specific form of interference after careful preparation. Sometimes it can even obtain data without our knowledge.

For instance, by seeking out and exploiting information of a personal nature – gathered even from public sources or as a result of our careless behaviour on social media. At other times, it can resort to a more personal approach and choose one of the targeted methods. For example, making non-standard offers, or in extreme cases, lobbying, overtly corrupt behaviour, coercion, or blackmail.

Have we detected any such attempts?

Of course, the Academy is not excluded from such attempts, and it is our task to draw attention to these possibilities and inform about them – as well as to help our institutes and staff, for example by recommending what to do if they encounter such conduct.

To find out what types of influence operations have been detected at the Academy and what researchers should do when they suspect attempted manipulation, read the rest of the interview here.

He has worked at the Institute of Experimental Botany of the CAS for over 25 years, where he has served as the head of the Pollen Biology Laboratory since 2004, and from 2007 to 2012, he served as Deputy Director. He is an internationally
recognised expert in the field of plant reproduction. He has been a member of the CAS Economic Council since 2017 and a member of the Academy Council since 2021. His responsibilities include coordinating conceptual matters of international cooperation of the Czech Academy of Sciences. Currently, he is also coordinating activities to aid Ukrainian researchers.

The December issue of the AB / Academic bulletin is available below in Czech (with the main story in English):