Greenhouse gases in soil, algebra, fish ecology, and modern history. Just a brief selection of the research areas pursued by some of the eleven newly awarded researchers. They received their honorary medals of the Czech Academy of Sciences from its President Eva Zažímalová on 14 September 2022 at the Academy headquarters at Národní Street in Prague. The highest award that the Academy of Sciences bestows – the De scientia et humanitate optime meritis medal – also found its new laureate, microbiologist Miloslav Šimek.

The ceremony opened with a speech by the President of the Czech Academy of Sciences, Eva Zažímalová. She emphasised the essence of scientific work, which comprises “the natural need to learn about the world and its laws”.

According to Prof. Zažímalová, this also lies at the core of the spirit of the Academy. “A spirit that is at one with the fact that in order to understand the world, we must continuously be getting to know it. This knowledge cannot be achieved except through curiosity, a willingness to ask new questions and overcome obstacles, and through patient and systematic research,” she explained. The ceremony was opened by the President of the Czech Academy of Sciences, Eva Zažímalová.

The soul of soil
The De scientia et humanitate optime meritis medal, the “queen” of the medals of honour of the CAS, was bestowed to Miloslav Šimek, a Czech soil microbiologist of world renown from the Institute of Soil Biology and Biogeochemistry at the Biology Centre of the CAS. He has long specialised in research on greenhouse gases produced and released by microorganisms and animals in soils. He has authored the Czech-language books Skleníkové plyny z půdy a zemědělství (Greenhouse Gases from Soil and Agriculture) and Živá půda (Living Soil) and was the mastermind behind the travelling exhibition Bez půdy to nepůjde (We won’t make it without soil), which was a significant contribution to the popularisation of his field. “The existence of soil is absolutely fascinating, the fact that it evolved in nature at all. Just imagine what the world would be like without soil,” Miloslav Šimek said. Just as it is impossible to imagine a world without soil, Czech science cannot imagine soil biology without the Miloslav Šimek’s contribution to the field. 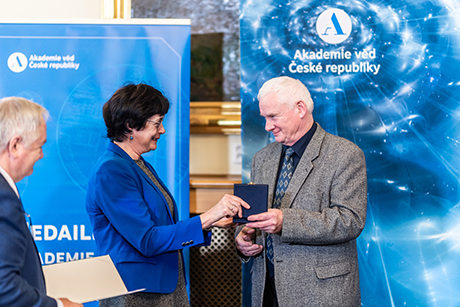 Different elements of chemistry
The Jaroslav Heyrovský Honorary Medal for Merit in the Chemical Sciences was awarded to Jiří Hanika from the Institute of Chemical Process Fundamentals of the CAS. His work in the fields of chemical reactor engineering, heterogeneous catalysis, organic technology and petrochemistry, and pharmaceutical engineering typically goes hand in hand with industry. In his acceptance speech, he did not fail to mention the legacy of the researcher whose name the medal bears. “Jaroslav Heyrovský was nominated for the Nobel Prize eighteen times – and in three different scientific fields, which only shows the enormous breadth of his scope. It is thus a great honour to receive this medal bearing his name,” Jiří Hanika said.

The same award was presented to Antonín Vlček from the J. Heyrovský Institute of Physical Chemistry of the CAS. His scientific field of expertise is the photophysics and photochemistry of transition metal compounds (platinum, manganese, iron, and copper), which are often found, for instance, in enzymes. He also works at the Queen Mary University of London and is still active in lab work.

The brilliant world of physics
The Ernst Mach Honorary Medal for Merit in the Physical Sciences was awarded to two researchers from the Institute of Physics of the CAS – Jiří Chýla and Ivan Pelant.

Jiří Chýla is interested in the physics of elementary particles and the structure of matter and the forces between its basic building blocks, chiefly quarks. In addition to his scientific work, he is involved in science policy and the popularisation of science. From 2006 to 2011, he coordinated the Centre of Particle Physics. “The fifty years I spent at the Czech Academy of Sciences were fantastic. Perhaps I also managed to contribute to the development of physics and the formation of science policies in the years when our institution was facing hard times,” Jiří Chýla noted.

Ivan Pelant focuses on luminescence phenomena in solids and laser spectroscopy. He initiated the construction of a time-resolved spectroscopic luminescence laboratory and was instrumental in the development of unique nanomaterials. He has co-authored patents and grants and has collaborated with foreign institutions. For his book Luminiscenční spektroskopie II (Luminescence Spectroscopy II), he received the Josef Hlávka Award for Scientific Literature. 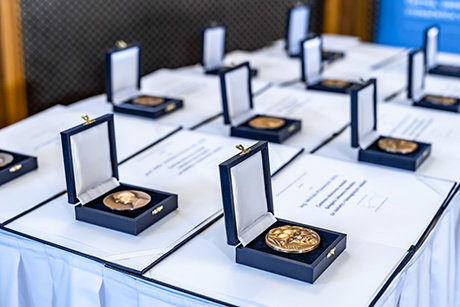 Jan Kubečka’s lifelong research endeavours relate to ichthyology and the ecology of fish, especially in relation to valley reservoirs and lakes. He also founded the international research school Fish Ecology Unit of the Institute of Hydrobiology at the Biology Centre of the CAS. Since 2012, he has served as director of his home institute. “I’ve been fortunate enough to work with a lot of great colleagues with whom I have hopefully advanced knowledge in our field a little bit. Try to act with honesty and fairness and you will be happy, just as I am at this very moment,” Jan Kubečka said while accepting the award.

František Marec’s research focused mainly on the sex chromosomes of butterflies. He is a recognised expert in insect genetics and cytogenetics. He also helped discover the first haploid animal. “I am delighted to receive the award in the bicentenary year of Gregor Mendel’s birth. Moreover, I myself studied in Brno [at the Mendel University] and I still remember counting peas during my tutorials,” he recalled.

Ecologist Karel Prach is interested in changes in vegetation after disruption and the restoration of ecological functions after the destruction of ecosystems. Later, he also focused on the ecology of river floodplains and invasions of non-native plants. His comprehensive take on the field of restoration ecology is particularly admirable. During his acceptance speech, the renowned researcher joked that the medal is awarded for lifetime achievement, adding: “I believe I will continue in my work and we will still be able to achieve many things in ecosystem restoration.”

Michal Pravenec is researching which genetic variants cause common diseases such as diabetes. He has gained international recognition for his research in the genetics of complex traits in animal models. In 2015, he was awarded one of the highest grants from the CAS, the Academic Award, for research into how excess salt causes hypertension. The awarded researchers and representatives of the Czech Academy of Sciences.

Historical changes as a foundation
Martin Markl from the Institute of Mathematics of the CAS became the recipient of the Bernard Bolzano Honorary Medal for Merit in the Mathematical Sciences. He has achieved international success in algebra, geometry, topology, and their application in mathematical physics. Markl’s results are also known to the winners of the Fields Medal, the “Nobel Prize” of mathematics, and he is also a recipient of the prestigious Academic Prize of the CAS. “I spent thirty years living under communism; I could not travel anywhere, and I devoted my time mainly to my studies,” Martin Markl recalled his early years as a researcher, adding that it was only after the fall of the Iron Curtain that he was able to fully develop his scientific potential.

The František Palacký Honorary Medal for Merit in the Historical Sciences was awarded to Miroslav Vaněk from the Institute of Contemporary History of the CAS. He is a scholar of modern history and introduced the oral history method into the Czech environment. In 2000, he founded the Oral History Centre, the first such workplace in post-socialist Europe, and served for two years as President of the International Oral History Association.

The medals were awarded to researchers from different corners of scientific disciplines, of which, as Eva Zažímalová mentioned, a “diverse range” can be found at the institutes of the Czech Academy of Sciences. We have been shown time and again that science has the ability not only to serve people, but above all has the gift of bringing them together, and not only in the case of festive ceremonies.