ERC grants for 3 experts from the Czech Academy of Sciences

An effective storage of solar energy, reactions of cells to stress, new strategies against cancer. Those ideas scored well in the competition of more than 4000 proposals and won the ERC Starting Grant. Four Czech proposals succeeded, three of them were submitted by experts from the Czech Academy of Sciences. The prestigious grants are funded by the European Research Council under the Europe Horizon programme. Grants worth on average €1.5 million are awarded to excellent and original projects that extend scientific knowledge or even provide a break-though.

Hana Cahová, Kateřina Rohlenová and Tomáš Slanina. They and their teams might be the ones who discover and describe the yet unknown, as only brilliant, original, and often also brave projects can win the ERC grants.

“The ERC grants are the most prestigious grants in Europe. They bring the scientists great number of finances with a low amount of administration and bureaucracy,” says Eva Zažímalová, the President of the Czech Academy of Sciences (CAS). “The grants are focused to pursue the ‘high risk/high gain’ research. There is a high hope of a truly cardinal shift in the given scientific field.”

397 early-career researchers from 22 countries won ERC Starting Grants 2021, meaning that €619 million altogether will be invested in excellent projects. The grants are not bound to an institution, but to the scientist, and therefore they offer more liberty in their following work.

“Letting young talents thrive in Europe and go after their most innovative ideas - this is the best investment in our future, not least with the ever-growing competition globally,” says Maria Leptin, the President of the European Research Council.

The secrets of molecules at the end of the RNA Hana Cahová leads the Chemical Biology of Nucleic Acids group at the Institute of Organic Chemistry and Biochemistry of the CAS.

The goal of her project that won the ERC grant is to uncover the secrets of the molecules at the end of the RNA in a cell, and their role in cellular reaction to stress conditions. Those molecules – known as the RNA caps – are very important structures which protect the RNA molecule against degradation from cellular enzymes.

Apparently, the caps have also other important functions, such as helping cells respond to their environment and stress conditions. It is very difficult to study them, though, because they are not easy to identify.

Hana Cahová and her team develop new techniques to capture those structures more easily and to shed light on the partners they react with and how. That can help to understand their metabolism and their function in cellular reaction to stress conditions

“This prestigious grant intended for research on ambitious and occasionally risky hypotheses will allow us to explore ideas that only a few years ago would have been considered unprovable and unexplorable,” says Hana Cahová. “Revealing the role of RNA caps will contribute to our understanding of the cellular mechanisms triggered by stress, which offers a wide spectrum of possible applications.” Kateřina Rohlenová (photo, in the middle) leads the Metabolism of healthy and tumour tissue at single cell resolution group at the Biotechnology and Biomedicine Centre of the CAS.

She and her team will investigate the metabolic communication in tumours to identify new strategies against cancer.

Within the ERC grant, Kateřina Rohlenová will study the intercellular communication of nucleotides, the building blocks of the DNA and the RNA, that are essential for cancer cell proliferation.

Inhibitors of nucleotide metabolism are the target of antimetabolites, a traditional anti-cancer therapy that has been used for more than 70 years. However, despite its time-proven, verifiable success, anti-metabolite therapy is still associated with high rates of resistance and toxicity.

„Thanks to the ERC Starting Grant, we will use the unique mouse model and methods with a high resolution on the level of single cell. Both will help us to understand the basic biology of the nucleotides exchange in tumours and the healthy tissue, to identify the Achilles heel of cancer cells in their natural environment, and to find new concepts for the therapy,” explains Kateřina Rohlenová. 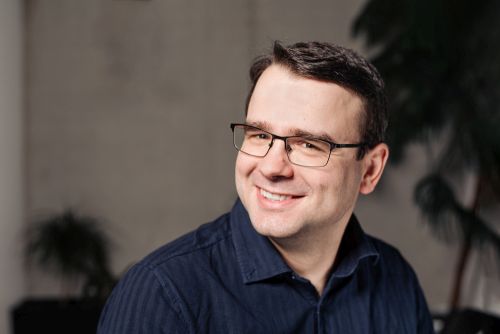 Tomáš Slanina, the leader of the Redox Photochemistry group at the Institute of Organic Chemistry and Biochemistry of the CAS, won the ERC Starting Grant for the possible solution of one of the greatest complications in the mass transition to sustainable energy sources, i.e. the possibility of stabilizing fluctuating production of solar energy and its efficient storage.

With his team, he develops a molecular system called SOLBATT for the transformation of light energy into chemical bonds and its subsequent conversion to electrical current through the use of organic redox switches.

Storing energy straight into chemical bounds offers a great potential. It represents a new possibility how to store the electricity on the spot of its origin with the help of a single solar battery. The use of such a solution in organic solar panels will help stabilize fluctuations in the production of solar energy.

“The ERC grant will allow us to fully develop an idea that came to me some five years ago and hasn’t let me sleep since. The deeper our research group delves into the matter, the more interesting the patterns and behaviors we discover,” says Dr. Slanina. “The five-year grant gives us the opportunity to focus on fundamentally new methods with big potential to advance our knowledge of the production, storage, and release of solar electric energy.”

Only every tenth proposal wins the grant

The Czechs do not belong among common and successful applicants for the ERC grants in Europe. While other countries succeed with dozens of projects, the Czech Republic can count those on fingers.

Therefore, an expert group was established in Czechia by the Czech Academy of Sciences and the Charles University. Experts from the required scientific fields are tasked with supporting the ERC grant proposals and with counselling the applicants.

In the past years, the Czech scientists have won over €61 millions thanks to ERC grants.