Starting today, those who visit the main building of the CAS will be able to experience the adventure of discovering and encountering faraway places and cultures at the Czechoslovakia in the Orient: The Orient in Czechoslovakia 1918–1938 exhibition. On view are also artefacts brought from the Orient and objects that were intended for export to these countries from Czechoslovakia.

The period of the First Czechoslovak Republic was marked by an interest in all things pertaining to the Orient, which was reflected in many spheres of human activity. The fascination with the Far East (East and Southeast Asia) and the Middle East naturally manifested itself in the arts, but the establishment of economic cooperation was also significant. Czechoslovakia found new trading partners in the Orient, exporting not only sugar and light industry goods, such as textile goods and glassware, but also weapons.

Fragments of the Orient at the HQ of the CAS
Adéla Jůnová Macková from the Masaryk Institute and Archives of the CAS, one of the institutions co-organising the exhibition, outlines what is on display at the CAS Gallery (Galerie Věda a výzkum): “The exhibition presents interesting objects and artefacts brought back from the Orient by travellers and researchers, as well as Czechoslovak products inspired by Oriental motifs and products intended for export to these countries.” Adéla J. Macková is, among other things, the head of a project on the origins of Oriental Studies in the Czech lands, as Rudolf Kučera, director of the Masaryk Institute and Archives of the CAS, mentioned on the opening night. 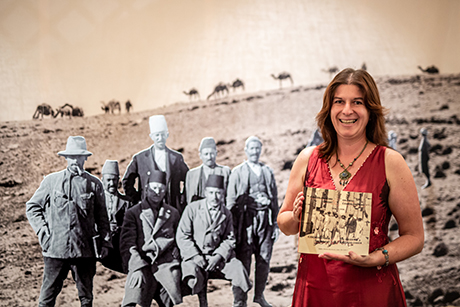 According to the co-organiser, Libor Jůn, the aim of the exhibition is to present Czechoslovak Oriental Studies as a scientific discipline anchored in the overall architecture of the politics and economy of an independent Czechoslovakia. Alongside audio-visual footage and various artefacts, including everyday objects and jewellery, the exhibition presents the context of economic, political, and scientific relations.

Some important exhibits and archival documents have been loaned by the National Museum in Prague, which has played a significant role in the natural history research on the Orient. In her speech, Adéla J. Macková also emphasised the contribution of individuals who graciously provided to the authors of the exhibition artefacts, photographs, and even, for instance, travel diaries of their relatives and acquaintances. Not only artists and travellers in their books or lectures, but also researchers communicated their findings about the territories of the Near East (Western Asia) and Far East (East and Southeast Asia) to Czechoslovaks.

Science in the Orient: The Orient in science
The popularity of the Orient in Czechoslovakia during the First Republic is well-illustrated by the research environment – our Orientalists of that time were dominating the global scientific ‘charts’. From Czech school classrooms, we might remember the name of Bedřich Hrozný, who gained worldwide renown for deciphering the Hittite language. However, his other colleagues – such as Orientalist Alois Musil, Arabist Max Grünert, Indologist Moritz Winternitz, and Egyptologist František Lexa – also gained recognition outside their homeland. Successful Oriental Studies were established in Prague, and the culmination of scientific interest in this geographical area was the establishment of the Oriental Institute of the CAS, which celebrated its centenary in 2022. 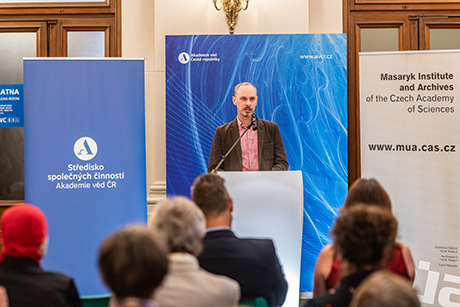 As an Orientalist himself, Vice-President of the CAS Ondřej Beránek could not be missing at the exhibition opening.

It was apt that it was Ondřej Beránek, Vice-President of the CAS and Orientalist himself, who provided the introductory remarks for the exhibition opening: “As an Orientalist, I am glad that the opportunity to open the exhibition fell to me. It shows aspects of what is familiar and close to me. Over the years that I have been researching the Orient, I have convinced myself again and again that it is much more interesting and enriching to transcend borders than to create them.” In his speech, he recalled the significant jubilee of the Oriental Institute of the CAS and added that the exhibition is one of the events organised by the Institute in celebration of its centenary.

The Czechoslovakia in the Orient: The Orient in Czechoslovakia 1918–1938 exhibition is on view for free at the main building of the CAS (Národní Street) until 6 November 2022 every weekday from 10 AM to 6 PM. During the Czech Academy of Sciences Week (31 October – 6 November 2022), it will also be open on weekends.