Why are populist parties thriving in Central and Eastern Europe today? What occupies the everyday thoughts of people inhabiting the border regions of Silesia or Galicia? Social anthropologist Johana Wyss from the Institute of Ethnology of the CAS will be exploring these issues with the help of a European Research Council (ERC) Starting Grant of almost 37 million CZK (1.5 million EUR). Johana Wyss is the seventh woman to join the ranks of 54 elite Czech scientists and scholars who have received the most prestigious European grant to date.

The five-member research team, led by Johana Wyss, will collect data on the collective memory of the inhabitants of four transnational regions spanning ten European states. The focus will be on Silesia, Galicia, Burgenland, and Istria.

The project entitled MEMPOP: Memory and Populism from Below offers a completely new perspective on the issue of populism not only in Central and Eastern Europe but as a global phenomenon as well. The European Research Council appreciated the novelty and originality of the approach which, instead of examining states, metropoles, and populist “celebrities”, focuses on the people who turn them into celebrities. “I want to focus on understanding the perspective and the legitimate and rational reasons which lead ordinary voters to support these types of politicians and their ideologies,” Johana Wyss explains. 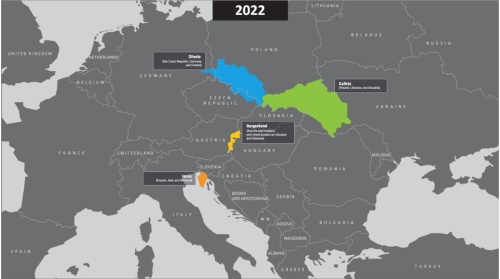 The four transnational regions to be examined as part of the project.

Silesia, Galicia, Burgenland, and Istria are regions characterised by harsh historical upheavals, frequent historical shifts of national borders and populations, as well as rising populist sentiments. “Across Europe, we can notice the rise of political parties burdened with populism. While most existing studies focus on populist politicians in big cities such as Prague, Warsaw, or Budapest, we will examine the often-neglected border regions and their inhabitants. We are interested in the rationale that leads voters to supporting populist movements,” the anthropologist explains.

How to study covert standpoints and opinions
The researchers will conduct their work using the participant observation method of field research, i.e., a long-term, roughly year-long stay on site at four transnational regions: Czech–Polish–German Silesia, Ukrainian–Polish Galicia, Austrian Burgenland, which was part of Hungary until the end of the First World War, and Croatian–Slovenian–Italian Istria. “I chose regions that had experience with or were part of the Austro–Hungarian Empire. Three of them also shared borders with additional European empires – Silesia with Prussia, Galicia with Russia during the reign of the Romanovs, and Istria with the Ottoman Empire,” Wyss explains the key to selecting these particular regions.

“Participant observation is a data gathering method that allows us to understand the respondents’ behaviour, attitudes, and opinions holistically, that is, as a whole. An essential part of this is establishing a genuine relationship and fostering respect and trust with each respondent,” the researcher emphasises, adding that all data collected as part of the project will be anonymised.

For more information regarding this year’s allotted ERC Starting Grants, check out their website.