It’s called Blastocrithidia nonstop and it’s a parasite – unknown until now to the scientific community and very unique at the same time. Why is its discovery so extraordinary? Experts have discovered that this newly described protozoan exhibits a completely unpredictable and distinct deviation from the genetic code that is otherwise identical in the vast majority of organisms, including humans. The genetic mystery was cracked by Czech molecular biologists, primarily from the Institute of Microbiology of the CAS and the Institute of Parasitology of the Biology Centre of the CAS. The project was supported by the Czech Science Foundation and the study was published in the prestigious scientific journal Nature.

Blastocrithidia nonstop, a parasite of heteropteran insects, was recently discovered by researchers in a fairly common type of shield bug, Eysarcoris aeneus, captured in a meadow of a nature reserve in the Liberec region of the Czech Republic. This parasitic protozoan does not directly attack humans, but it belongs to the Trypanosomatida group – protozoans closely related to Trypanosoma brucei, which causes the deadly disease of sleeping sickness in humans and cattle. Its genetic “deviation” makes the new protozoan incredibly valuable for further biological research, as it may allow researchers to manipulate the genetic code in ways previously unimagined.

The newly discovered and described flagellate Blastocrithidia nonstop is closely related to the trypanosome that causes sleeping sickness.

The genome is like a book full of sentences – genes
Genetic information is stored in DNA molecules. Its individual sections are called genes, and the set of these genes in any given organism is called the genome. Each gene contains within it the recipe for making one protein, composed of different combinations of twenty basic amino acids in a process called protein synthesis. To simplify and paint an illustrative analogy (see Figure 1 below), a gene can be thought of as a single sentence beginning with a capital letter and ending with a full stop, whereas the genome is the book itself telling the whole story. The capital letters and full stops separate individual sentences, giving clear structure and meaning to the story as a whole.

Recently, however, it was discovered that there are organisms whose ‘sentences’ have been infiltrated with extra full stops, replacing specific letters (E and P, which in this example stand for specific amino acids) of arbitrary words. As a result, readers (in the case of the genome, these comprise ribosomes, the cellular machines which decipher the genetic code) are confused about where the sentences actually end, and the syntax and story become completely incomprehensible. In a figurative sense, one could say that they experience a confusion of languages as in the biblical myth of the Tower of Babel. 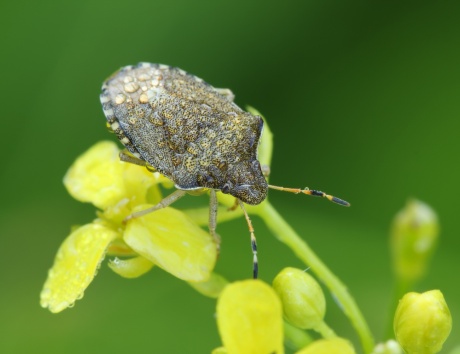 Perhaps the most confusing of all is the newly described genus of Trypanosoma parasitising Czech heteropteran insects. Researchers from the Institute of Parasitology of the Biology Centre of the CAS and the Institute of Microbiology of the CAS have discovered a molecular mechanism that has evolved in this protozoan to allow the reader (ribosome) to navigate through its genetic sentences as if there were no extra full stops. However, the sentences are so specifically encoded that readers (ribosomes) of no other organisms can correctly decipher the story (genetic information).

“The trick lies in the nature and length of the transfer RNA molecule, or tRNA, which normally serves as the ribosome’s puzzle-solving guide, and in the unique modification of one protein that normally ensures stop codon recognition in cells, i.e., the precise termination of protein synthesis,” explains Leoš Valášek from the Institute of Microbiology of the CAS. Due to the interaction of these two modified molecules, the ribosome of this protozoan knows when to end a sentence correctly (regardless of the abundance of full stops) and conversely when to replace the full stops with the two original letters (E and P), which gives the story (genetic information) back its meaning. 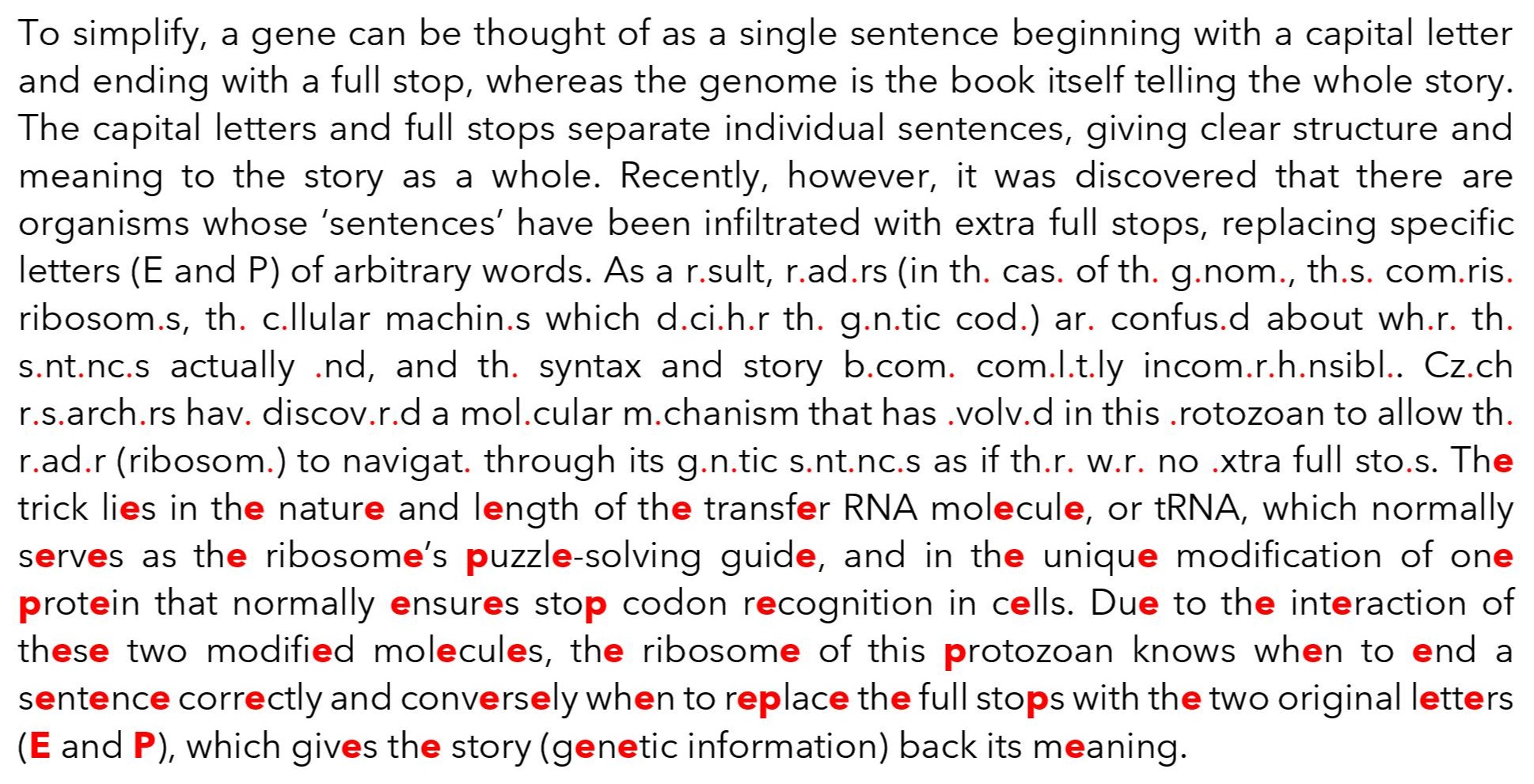 “It looks a bit like the corrected dictation exercise of an inattentive elementary school student, but as the examined Trypanosoma convincingly demonstrates, it works. This is a completely unexpected and dramatic departure from the standard genetic code that is the essence of all living things,” adds another co-author, Zdeněk Paris from the Institute of Parasitology, Biology Centre of the CAS.

Why does it have “nonstop” in its name?
“The flagellate was named Blastocrithidia nonstop based on its very dramatic departure from the universal genetic code. In fact, it carries thousands of UAA, UAG, and UGA stop codons within its genes, but its ribosome doesn’t read these as the end of the production of the corresponding protein. If it did, none of its proteins would be full-length, which would be lethal to its cells,” Zdeněk Paris explains. Instead, protein synthesis continues (hence the name Blastocrithidia nonstop) as the ribosome assigns the amino acid glutamate for UAA and UAG and tryptophan for UGA to these stop codons with the help of unique adaptations that the Czech researchers have detailed in the new study. As a result, everything this protozoan needs to live, it can easily make on its own.

This unique discovery is important not only for basic biological research, but also for the latest scientific trends, such as synthetic biology, which aims to artificially create and improve the production and properties of biological substances for a variety of purposes.

The study, published in Nature, is available here.