Czech attempt to save the clouded Apollo, a critically endangered butterfly

Sometimes, saving disappearing insect species can seem like rearranging the deckchairs on the Titanic. But Czech entomologists aren’t losing hope or giving up on the protection of rare beetles and butterflies, one of which is the clouded Apollo (Parnassius mnemosyne), a butterfly that the Czech Entomological Society named Insect of the Year 2021. Why are the numbers of certain insect species dropping to critical levels and what solutions are experts proposing and implementing?

Finding a crushed butterfly on the sole of your boot may not have as far-reaching consequences as it did in Ray Bradbury’s classic time-traveling sci-fi story, but it still might get you in serious trouble, especially if the specimen at hand happens to be a protected species – for instance, the clouded Apollo. An unlikely scenario? Stranger things have happened. Causing the death of this rare butterfly may not land you in jail but will likely land you with a hefty fine. Dozens of similar cases have occurred in the Czech Republic.

The rare, legally protected species, Parnassius mnemosyne, needs to feed off specific plants (food plants) from the plant kingdom to survive – the Corydalis species, a fairly common flowering plant that favours deciduous forests. Wherever the Corydalis thrives, the clouded Apollo can, too – if the woods in question get enough sunlight, that is.

Until a few decades ago, the clouded Apollo flourished in many places in the country. This large, today critically endangered butterfly from the Papilionidae family can live in environments from the lowlands to the upper forest boundary and used to be a common species on our territory. By the end of the last century, however, it went completely extinct in the Bohemia region of the Czech Republic, and the last populations can be found in Moravia. One such area is the Bulhary preserve of the Milovice Forest in the Pálava Protected Landscape Area, a place tied to the research efforts of Lukáš Čížek and his colleagues from the Institute of Entomology of the Biology Centre of the CAS.

From thousands to dozens, from dozens to hundreds
The researchers’ efforts to save the disappearing butterflies largely replicate and further develop the project of the entomologists’ research team which was carried out in the Bulhary preserve in 2003–2004. What exactly did the Czech experts focus their research on fifteen years after their predecessors in the preserve? Simply put, they were keeping a tally of butterflies. While during the first monitoring, they counted around 4,000 specimens of the clouded Apollo annually, in 2019, the figure barely reached 100. “The situation there has deteriorated dramatically in those few years,” Lukáš Čížek pointed out the rapid disappearance of the butterfly from the biotope.

When researchers witnessed the extreme decline of the clouded Apollo in the Bulhary preserve, they came up with a plan for preservation. What followed was a fairly successful intervention which included adapting a patch of forest to allow for more sunlight to better suit the butterflies as well as providing a corridor to make this now suitable habitat easier to find. This was implemented because this species does not live in dense forest and does not typically like to fly there. Thanks to the experts’ efforts, the population grew to several hundred specimen the following year.

The whole situation was monitored by Jiří Beneš and Martin Konvička from the Institute of Entomology at the Biology Centre of the CAS, who have been involved in the protection and research of endangered species for a long time and who worked on the project in 2003–2004. They founded the Mapping and Conservation of Butterflies in the Czech Republic website (http://www.lepidoptera.cz/ – in Czech only). They managed to identify the problem of the disappearing butterfly, propose a solution, and push through the intervention in the area in cooperation with the Administration of the Pálava Protected Landscape Area. It’s mainly thanks to their resolve and initiative that the numbers of butterflies have started to go up again. 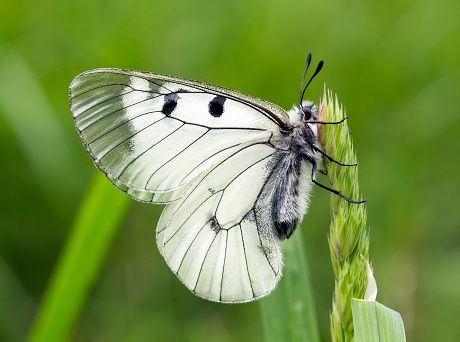 With or without a net
What does counting butterflies ‘on the ground’ actually look like? “We carry around a notepad and pencil along with a map, GPS, and a watch. The most important thing is to have at hand an experienced butterflier, i.e., a person who can identify individual butterflies by species without having to catch most of them in a net,” one of the entomologists explains. The butterfliers trekked through the forest along a route spanning many kilometres, separated into sections of several hundred metres, and recorded the numbers and species of butterflies they encountered in individual sections.

Why butterflies are dramatically declining in the Bulhary preserve has been well-documented by experts. Improper forest management, which is damaging the landscape, is to blame. A widespread problem is milling. What is it and why is it being done in forests? After logging, a tractor with a milling machine will come into a clearing to make chips out of stumps and other wood debris. It then either ploughs these wood chips into the soil (deep soil preparation) or mixes them into the surrounding vegetation (surface soil preparation).

The clearing is then sprayed with a non-selective herbicide (a.k.a. a total weedkiller); Roundup is usually used. The goal is to make the clearing accessible for machinery that would otherwise be obstructed by stumps and to eliminate vegetation which competes with the oak seedlings or saplings. As a result, however, insect life (not only that of butterflies, but also beetles and other species) is unfeasible in such an environment, and the mere intervention of heavy machinery kills hundreds, if not thousands, of individual insects – adults, caterpillars, and larvae living in the tree stumps.

Forest animals, including fallow deer and other species of deer, are also detrimental to the clouded Apollo living a happy life. Every year, ungulates (hooved mammals) completely graze wildlife preserves bare, which, until recently, comprised an important refuge for many endangered and protected plants and animals. The Corydalis, i.e., the food plant for the caterpillars of the clouded Apollo butterfly, is disappearing, and with it entire butterfly populations. Yet the solution which experts in the Bulhary preserve are calling for is not that complicated – no milling, no poisonous weedkillers, and reducing the number of game animals. 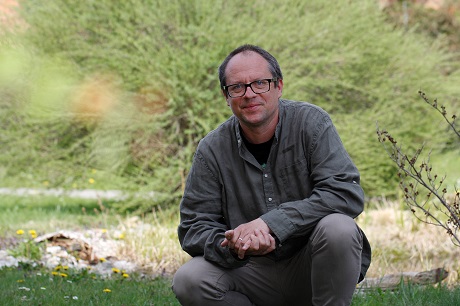 Lukáš Čížek heads the Department of Biodiversity and Conservation Biology at the Institute of Entomology (Biology Centre of the CAS).

A bug in the system
According to Lukáš Čížek, our state authorities are approaching insect conservation all wrong. Although the opinions and recommendations of experts are clear and well-founded, the state often focuses on minor things, such as the senseless punishment of “poachers”, i.e., amateur entomologists, who add a few protected specimens to their insect collection. In Čížek’s opinion, high fines and harsh penalties are absurd. If the biotope is in good condition, the insects will manage on their own and survive. A few “poached” butterflies will do no harm to the overall population.

The clouded Apollo is not difficult to protect. If its habitat can be maintained, the butterfly will thrive. However, what stands in the way of this is damage to the landscape and nature by inappropriate forest management, and negotiations with those institutions and companies that are responsible, in this case with the Czech State Forest agency, are a complicated matter, with its officials sometimes not even responding to inquiries.

Results are often slow to come to light, and sometimes it can seem like a futile effort. “A significant part of our scientific work is focused on insects and how to help them survive. Without endeavouring to put research results into practice, it would all be meaningless. Sometimes you run into people not understanding the point of what we do; established practices are not easy to change. But eventually, you do meet people who can be reasoned with, who are willing to compromise. Things are changing – sometimes very slowly, but they are changing,” Lukáš Čížek concludes optimistically.