Books donated to the Oriental Institute presented by the Japanese Ambassador

The endowment consists of books written in English or Japanese that represent a variety of topics and genres. “Among them, you will find works on society, economy, language, geography, but also fiction. The Nippon Foundation provided us with a diverse range of publications designed to contribute to our understanding of Japan. They can be an ideal source for students who are interested in Japanese culture and society,” explains Nobuko Toyosawa, head of the Department of East Asia at the Oriental Institute of the CAS, who has been based in Prague since 2017. Modern Japanese Culture, Japanese Diasporas, or Premodern Japan. These titles and more can be found in the list of new books, including several novels like A Tokyo Romance by British-Dutch writer, Ian Buruma.

The Orient in literature
“We consider book donations very important at the Oriental Institute, because it is thanks to them that we are able to gradually enhance our book collection, thus filling the shelves that emptied somewhat during the 1970s,” says Táňa Dluhošová, director of the Oriental Institute of the CAS. Most of the staff at the time left the institute for political reasons, and it was not possible to conduct research freely or purchase the relevant literature. 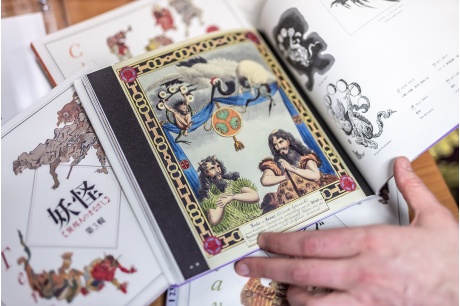 The donated books are about Japanese society as well as mythology.

The public library now houses over 270 thousand volumes in its collection and is one of the largest at the Czech Academy of Sciences. “Our library collections are basically divided into two sections. One is intended for specialists and researchers and contains sources that focus on issues in depth. The other section is suitable for a more general public interested in topics regarding Asia,” notes Reysa Alenzuela, head of the General Library of the Oriental Institute of the CAS.

The library is open to the public for a minimal fee, and information regarding opening hours and loan services can be found on its website.