At Expo 2020, algae show their potential for plants and people

Water made from air gurgles under the clouds of the Czech pavilion at the World Expo exhibition and irrigates a garden in the desert. Also, a glass palm shines there, growing nutritious food for humans and animals. These wonders have two things in common - they were prepared by scientists from the Academy of Sciences, and algae plays a major role here.

They're tiny, but important. Microscopic algae can serve humans in many ways. At the Expo, however, they're being presented mainly as fertilizer and possible food.

Alga Oasis - the factory of the future

Microalgae are a kind of small factory for valuable substances for modern biotechnology. Thanks to them, various problems can be solved, such as the lack of quality food, because they provide a nutritionally rich food source. Therefore, scientists from the Institute of Microbiology of the CAS came up with an idea to bring the process of their cultivation closer to the public at the Expo. They created a glass, glowing palm tree that artistically represents a model of a functional photobioreactor, and named it Alga Oasis. Inside the glass tubes of the palm tree, a liquid bubbles up. The bubbles are created at the place where the viewer moves. But the object also reacts to the visitor by changing the light scheme. Pictorial light illustrations then explain the action inside the exhibit.

"I am convinced that the exhibit fits perfectly into the concept of the Czech pavilion called Connecting minds, building the future," says Jiří Hašek, Director of the Institute of Microbiology of the CAS.

The time of microscopic algae as a food source may soon come. The number of people on the planet is growing and conditions for traditional agriculture are deteriorating due to the climate change. Although microscopic algae will not become a mass food replacing grains even in the next few years, they have great potential for humans.

A garden in the desert

At the heart of the Czech pavilion is the S.A.W.E.R. (Solar Air Water Energy Resource) system, which produces water from dry desert air using only solar energy. Part of the water is drained into a special room where the photobioreactor and algae come back into play. This time, however, it is all about getting nutrients from the air into the "poor" water. Without nutrients, nothing will grow, no matter how much water there is. 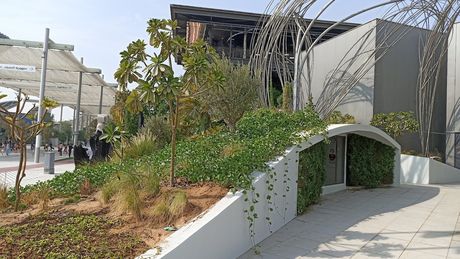 "It looks like a long stainless steel cascading table, with a continuous flow of green water. Special freshwater microalgae proliferate in it, which are able to take up nutrients from the waste water, bind them organically and then slowly release them to the plants," Miroslav Vosátka from the Institute of Botany of the CAS explains. 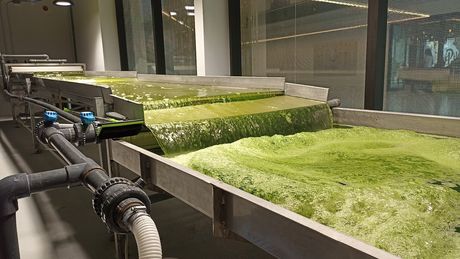 In addition to algae, there are also microorganisms in the water. Thanks to this connection, a garden has grown in the Dubai desert. No rain. The mixture of water, algae and organically bound nutrients is fed through a watering pipe directly to the roots of the plants, about 20 cm below the soil surface. This significantly reduces water loss through evaporation.

In February 2022, the Academy of Sciences will take up the baton in a rotating exhibition with the theme Energy the Smart Way. For example, there will be an interactive model of a tokamak - a device for producing energy by thermonuclear fusion, or a concept of a ship that disposes of waste from plastic islands in the seas with minimal residual unprocessable waste.

Share this article
© Centre of Administration and Operations of the CAS, v. v. i.
-->