Aqueous batteries: a promise of cheap and safe energy for the future?

Energy supply can be considered the Achilles heel of the modern world, and it is increasingly the center of attention for experts, politicians, and the general public alike. Today, producing energy is not so much the issue. What’s more pressing is how to store or transport energy efficiently, cheaply, and safely. In this respect, our prospects might be improved by a new type of aqueous battery on the basis of saline water, developed by researchers from the Institute of Physics of the CAS and the J. Heyrovský Institute of Physical Chemistry of the CAS.

The basis of the ground-breaking discovery consists only of saline water, zinc, and graphite, which are relatively cheap and readily available materials. At first glance, it may seem that anyone can build their own advanced energy storage device at home in their kitchen. But it’s not that easy – there are years of work and research backing the prototype. The story of the aqueous battery begins not with the vision of a new technological solution, but with basic research into two-dimensional materials, in this case: graphene.

Most informed readers will think of graphene as a thin layer of graphite (carbon) which is one single atom wide. This is how researchers most often present this currently intensively studied material. However, there are more ways how to arrange graphene – for instance, three-dimensional graphene. If researchers carefully stack individual, one-atom-wide layers on top of each other, the interaction between them changes the properties of the material as a whole.

The research of the lead author of the new battery, Jiří Červenka from the Institute of Physics of the CAS, focuses on yet another, different type of material, namely a subtype of three-dimensional graphene which retains the specific properties of a single-atom layer. “Our material’s porous structure resembles a sponge, and because of the large spacing between its atoms, it contains an unusually large surface where reactions can occur,” the physicist explains. 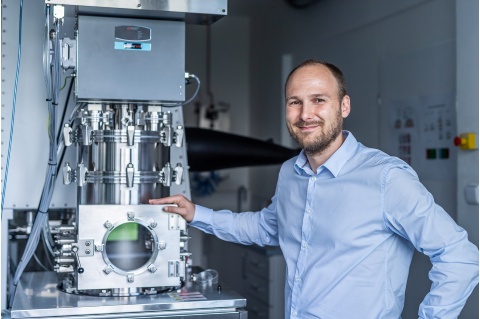 At the Institute of Physics of the CAS, Jiří Červenka leads his own research group of Nanoscale Materials and Nanosystems. His focus is on 2D carbon materials such as graphene and low-dimensional semiconductors (nanosilicon).

But why is this porous graphene significant when it comes to energy sources? Every modern battery is based on electrodes where electrochemical reactions occur. Logically, then, materials with the largest possible active surface area are sought for the production of batteries, so that as many reactions as possible can take place on the surface area at once. The larger the surface area, the higher the capacity of the battery. It was five years ago, when researchers began to consider the possibility of using these types of materials to create advanced batteries, that porous graphene emerged as the ideal candidate.

A discovery built on water
In addition to electrodes, batteries also consist of an electrolyte – a solution that conducts electric current between the electrodes thanks to the ions it contains. To develop new energy storage devices, researchers test different types of materials and solutions until they find the right combination. That, at least, is the usual procedure. But the researchers in Jiří Červenka’s team chose a slightly different strategy and considered the problem from a more general point of view. First, they thought about the future of batteries. What requirements should tomorrow’s energy sources meet? What characteristics should they have?

They should be economical, environmentally friendly, safe, and preferably made from natural resources. The technology based on them should therefore remain cheap, accessible, and degradable, even in the case it become successful and widely used. The subsequent ‘selection process’ thus included only those materials that met these requirements.

And the winner of the selection was water – or, more precisely, a high amount of the chaotropic salt of zinc perchlorate added to a water solution. The achieved voltage range of the electrolyte was comparable to that of organic electrolytes used in commercial lithium batteries. “We considered other types of chemical compounds, but eventually it turned out that perchlorates represent uncharted ground in the battery industry. So it’s them we focused on,” explains Otakar Frank from the J. Heyrovský Institute of Physical Chemistry of the CAS, whose team focused on researching the electrochemical processes that occur between the electrolyte and graphene. Although the researchers initially experimented with other types of salts, such as aluminium-based ones, the solutions produced were very acidic and corrosive, causing the electrodes to quickly decompose. By finding the optimum combination of graphene electrodes and saline solution, the researchers were eventually able to eliminate the most significant drawback of aqueous batteries that had prevented their widespread use in the past: low capacity.

A battery that won’t explode
The capacity of a battery is determined by ratio to its weight, which – for such a small prototype – makes it very difficult to determine accurately. But the test results so far have been promising, with the capacity comparable to the nickel-metal hydride batteries we can buy in shops in the form of the familiar double-A batteries. In addition, the battery has been confirmed to have a very good battery life. After 500 charge/discharge cycles, there is no considerable decrease in performance. 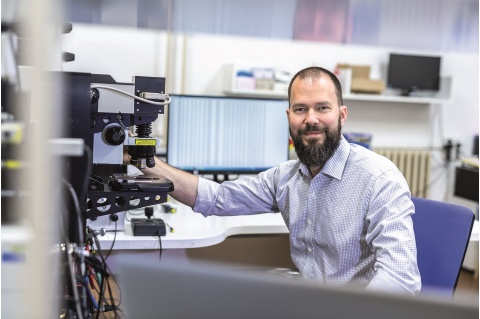 Otakar Frank works at the J. Heyrovský Institute of Physical Chemistry of the CAS as the head of the Department of Electrochemical Materials. He researches external effects on the properties of two-dimensional nanomaterials.

In a sense, one could say that this discovery goes back to the very roots of energy storage. In fact, the first ever battery, created by Alessandro Volta already at the end of the 18th century, was also water-based. However, it is only in the last decade that research into these technologies is experiencing a boom. It is being driven by the rapid development of mobility, which places increasingly stringent demands on performance while prioritising previously neglected safety. Today’s typical lithium-ion batteries, which power laptops and other portable electronics as well as electric bicycles, contain highly flammable organic electrolytes and lithium compounds and in extreme cases can even explode.

A salt water battery could thus meet the new demands we are placing on these technologies: it is high-performance, environmentally friendly, and there is no risk of explosions or self-ignition. However, like any other type of battery, it has a number of limitations. The most important one stems from the fact that it is not suitable for small electronic devices and mobile phones. The amount of energy the battery can store is still relatively small in relation to its weight. Wherever weight is a factor, for example in our smartphones, watches, or electric cars, this new salt water battery will not be of use. However, the situation is different in cases where weight is not a factor and where sustainability, the highest possible capacity, and the lowest possible cost are the key requirements. A sector where the discovery of Czech researchers could really shine is energy storage in photovoltaic power plants or stationary battery systems.

Small prototype, much potential
However, the development of a safe and cheap battery is still at the very beginning. A promising prototype can indicate the way forward, but the transfer towards a commercial environment is long and challenging. “As researchers, we kind of threw our battery together on the go. Therefore, in the future, we want to test out how it could be produced on an industrial scale and whether it will retain its ecological and economic qualities,” Jiří Červenka explains. The aforementioned porous graphene may also be a potential obstacle. Experts can easily prepare graphene for research in the laboratory, but the mechanisms for commercial production do not currently exist – at least not at the quality which can be synthesised at the Institute of Physics of the CAS.

But such an obstacle is not insurmountable. Just as the development of ways to bring the new battery into commercial production is not slowing down, neither is the basic electrochemical research being carried out at the J. Heyrovský Institute of Physical Chemistry of the CAS. This has so far concentrated on the analysis of the aqueous solution within the battery. “Now we need to take a closer look at the electrodes themselves,” Otakar Frank indicates what’s next in store for the research team. “So far we’ve been using graphite, but it is quite possible that we will find other and more suitable materials. There is an infinite amount of combinations, but cost, stability, and safety remain a priority.” 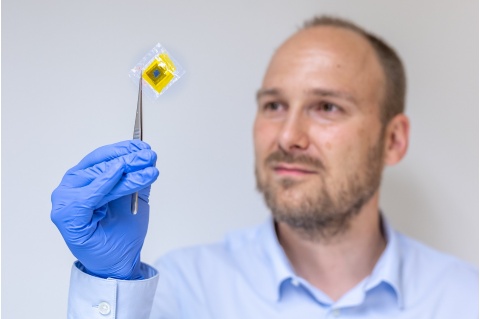 The aqueous battery technology is currently in the prototype stage. While small and unobtrusive, it harbours extraordinary potential.

The potential of the now patented technology is far-reaching and a number of companies have already expressed interest. “These are mainly companies that use batteries as a backup source to solar cells or to secure their production processes,” says Jiří Červenka, assessing the reaction of the commercial sector. “But we are not yet at the stage where we could offer them the technology in a finished state.”

However, the positive response clearly shows how much hunger and demand there is for similar solutions. China is the world leader in research and production of such technologies. However, a number of countries in Europe also produce batteries, such as Poland and Germany. The inventors of the Czech salt water battery would like their invention to remain in Czech hands and would therefore like to move its production to a domestic company.

Energy for a more secure future
Increasing energy independence is one of the priorities of the Czech Republic, and the current situation regarding energy resources and energy supply has highlighted a long-neglected fact: those who have energy in reserve are better prepared for future contingencies. “Efficient energy management is one of the ways we can improve not only our environment,” Otakar Frank says. “Using small, localised sources and storing energy on site makes more sense than transporting large amounts of energy over long distances, if only because of the huge demands on the transmission network,” he concludes.

Developing ways to store energy efficiently and practically will be one of the scientific priorities of the Czech Presidency of the Council of the European Union, and is also one of the long-term research priorities of the Czech Academy of Sciences as part of the Strategy AV21 Sustainable Energy research programme. The findings of Jiří Červenka’s team fall under this category. “When we see all the technological progress around us, the devices we have at our disposal today are all just clever applications of basic research,” Červenka points out. Discoveries of this kind have a decisive impact on how our world and society will look like and function tomorrow.

The article can be found in the current Czech issue of the CAS magazine A / Věda a výzkum: