An investment fund created. It will support innovative scientific projects

The new i&i Biotech Investment Fund will focus on supporting academic spin-off companies, particularly in the areas of drug development, diagnostics, and medical devices. The fund is being created as the first of its kind in Central and Eastern Europe, thanks to the cooperation of the European Investment Fund and the i&i Prague transfer company at the Institute of Organic Chemistry and Biochemistry of the CAS. So far, the fund has more than EUR 45 million at its disposal, but the total amount may rise further, as other investors, such as the Charles University's subsidiary Charles University Innovation Prague, are planning to join the fund.

The two years of the covid-19 pandemic have clearly demonstrated the importance of supporting research in drug development and diagnostics. While the Czech Republic has long had an excellent scientific record, the transfer of research results into practice is worse, as it requires a strong financial backing. i&i Biotech Fund could make a difference.

"The launch of the fund gives us the opportunity to finance the most promising technologies much more efficiently and often without the need for a lengthy search for co-investors," says Jaromír Zahrádka, director of the fund and one of the founders of i&i Prague. This will make it possible to pay for more demanding drug development projects and diagnostic methods, which until now have had great difficulty finding investors.

Building on the success of Antonín Holý

Czech science has much to offer. Perhaps the best-known example is the success of Antonín Holý, who worked for many years on the development of antivirals. However, without his cooperation with the American company Gilead, his drugs (AIDS, hepatitis B) would probably never have reached the market and saved millions of patients worldwide.

"If we want similar stories to be repeated, we must continuously develop tools to support transfer and facilitate the creation of new companies capable of bringing the development of ground-breaking inventions and technologies to a successful conclusion and to succeed in the fierce international competition," says Zdeněk Hostomský, director of the Institute of Organic Chemistry and Biochemistry of the CAS.

The Academy and the University as pioneers

The money from the fund should support more than 20 innovative projects over the next 5 years. The fund's investment strategy targets the natural sciences, with a focus on the development of new drugs, innovative diagnostics, medical devices, and other biotechnologies. Specifically, these will be scientific discoveries that have already been validated in the laboratory but have not yet begun the long journey to commercial exploitation. The smooth transition from lab to practice is handled by spin-off companies. The new fund is intended to support such spin-offs, primarily the Czech ones. However, other European projects can also get support. 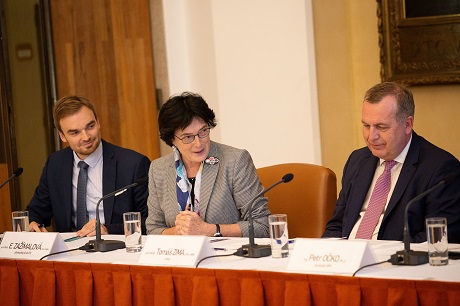 Eva Zažímalová, President of the CAS, and Tomáš Zima, Rector of Charles university

So far, the main investors are i&i Prague at the Institute of Organic Chemistry and Biochemistry of the CAS and the European Investment Fund (EIF), soon to be joined by the Charles University through its subsidiary Charles University Innovation Prague.

With the support of the EIF, several European scientific institutions have already established their funds, such as the Flemish Institute of Biotechnology or the University of Manchester. In Central and Eastern Europe, however, the establishment of the i&i Biotech Fund is a unique event that places the Czech Academy of Sciences and the Charles University among the pioneers in this direction.

"There is still a lack of investment resources for research in the Czech Republic and this is a tool to help the best of technologies reach patients. The fact that the European Investment Fund has chosen the Institute of the Academy of Sciences to cooperate with shows that the quality of research in this institution has long got even with that of the most advanced countries in Europe, and we are of course pleased about this," said Eva Zažímalová, President of the Academy of Sciences of the Czech Republic.