The reconstructed appearance of a woman buried four thousand years ago

Fair complexion, brown hair and brown, widely spaced eyes, a prominent chin, a petite figure, adorned with bronze and gold jewellery and a magnificent amber necklace: this is how the woman buried with luxurious equipment in Mikulovice near Pardubice looked like. An accurate and scientifically based reconstruction of her appearance was completed by anthropologist Eva Vaníčková and sculptor Ondřej Bílek from the Laboratory of Anthropological Reconstruction of the Moravian Museum, in cooperation with archaeologist Michal Ernée from the Institute of Archaeology of the CAS, Prague.

The woman chosen for the reconstruction of her appearance died around the age of 35 and came from the upper social class of the Early Bronze Age. Her grave is the richest female grave of the so-called Unetice archaeological culture and one of the richest in Europe at the time. She was buried with a total of five bronze bracelets, three bronze pins, two golden earrings and, above all, a magnificent three-row amber necklace consisting of more than 400 beads and at least five so-called dividers.

"This is an absolutely unique piece of jewellery, which is unparalleled among the finds from this period," says Michal Ernée from the Institute of Archaeology of the CAS, Prague, who is the winner of the Academic Prize and the head of the entire reconstruction project. "The radiocarbon dating carried out in the Mannheim laboratory dates the grave between 1880 and 1750 BC," adds the archaeologist.

Based on real findings: without speculation and artistic licence

An accurate anthropological reconstruction was possible thanks to the well and almost completely preserved skull of the buried woman and also thanks to the analysis of the archaic DNA (aDNA - ancient DNA) extracted from the bones of the buried woman. “It's not just speculation nor artistic imagination. The analysis not only confirmed the gender of the buried woman but also gave us more information about the colour of her skin, hair and eyes. This cannot be obtained in any other way than DNA analysis," emphasises Eva Vaníčková from the Laboratory of Anthropological Reconstruction of the Moravian Museum.

"It is this precise and scientifically-based information that takes the whole reconstruction to a much higher level of quality and allows us to get a much more realistic idea of her appearance, closer to the original reality," explains the anthropologist.

According to Eva Vaníčková, the method of anthropological reconstruction, based on empirical foundations, significantly enriches the possibilities of presenting anthropological findings to the general and professional public. "We observe an increasing demand for "live", three-dimensional and as realistic as possible outputs. I think that this allows the current generation growing up in the "digital environment" to perceive the results of archaeological research in a holistic and comprehensible way," believes Vaníčková. 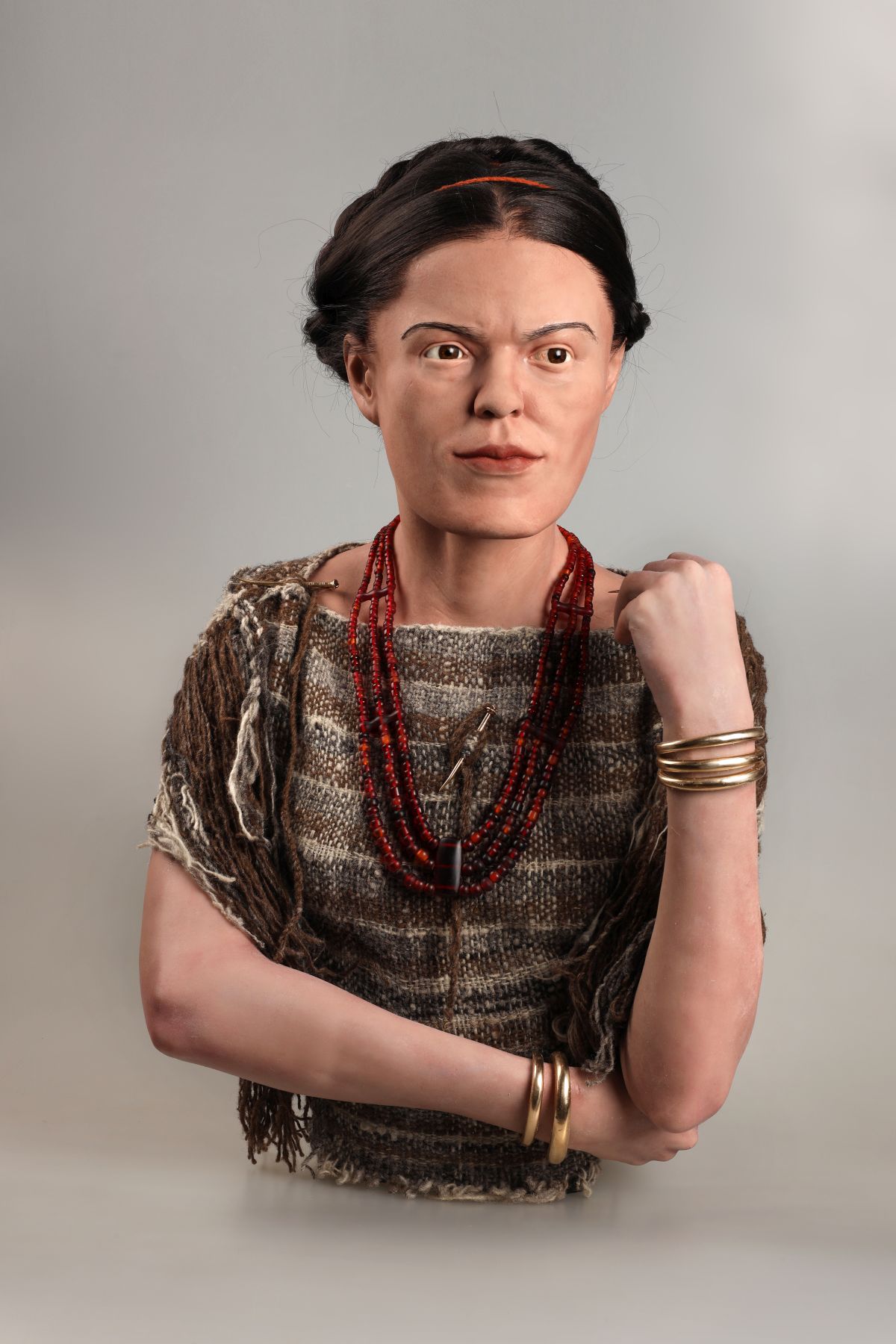 The Amber Gold Mine

In 2007-2009, archaeologists from the Institute of Archaeology of the CAS, Prague, and the East Bohemian Museum in Pardubice examined several groups of skeletal graves from the Early Bronze Age, i.e. from 2200-1700 BC, in the Mikulovice locality near Pardubice. "It soon became clear that the local burial site is a real gold mine, not only because of the richness of the burial equipment of the local deceased but especially because of the great amount of completely unique information about this period," says Michal Ernée from the Institute of Archaeology of the CAS in Prague.

One of the significant differences between the territory of today's Bohemia and all neighbouring regions is the mass occurrence of amber in the graves of local inhabitants. "Amber is clearly of foreign (Baltic) origin in our territory and it is, therefore, an important proof of the transregional contacts of the local inhabitants in the Early Bronze Age," adds the archaeologist.

However, the burial site in Mikulovice clearly stands out for its richness. With almost 900 amber objects identified in 27 graves, Mikulovice is the richest site for amber in the entire Unetice world and one of the richest in Europe at the time. "Amber necklaces, which are typical female jewellery, have been found in more than 40% of all female graves here, which is an extreme amount," adds Michal Ernée.

Skeletal burial grounds are a "godsend" for archaeologists. Compared to other types of sites, such as settlements or bronze object depots, they contain human skeletons, burial equipment of the deceased and other important objects. Human skeletal remains, such as the skeleton of the woman from grave 2, whose appearance has now been recovered through anthropological reconstruction, are a very promising source of information for scientists, especially thanks to the dynamically developing fields of archaeogenetics, nutritional and mobility isotope analysis, palaeopathology, radiocarbon dating and others.

Unetice culture at the top of Europe

The centuries around and after 2000 BC are associated in a pan-European context with the beginnings of Bronze Age metallurgy and the development of long-distance trade and trans-regional contacts of all kinds. At this crucial time, the area of today's Bohemia, associated with the so-called Unetice archaeological culture, was one of the most advanced areas of Europe, alongside the areas of southern England and south-eastern Spain, and its inhabitants set the tone for the social, economic and political development of the whole of wider central Europe for several centuries.

The authors of the jewellery replicas are restorer Ludmila Barčáková (amber necklace and gold earrings) from the Institute of Archaeology of the CAS, Prague, and metalworker Radek Lukůvka (bronze bracelets and pins), while the author of the clothing accessories is archaeologist specialising in textiles Kristýna Urbanová.

Annual Reports of the CAS