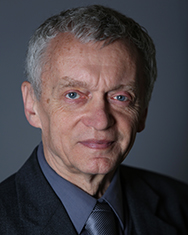 Petr Hadrava in the years 1969–1974 he studied theoretical physics at Faculty of Mathematics and Physics of Charles University (MFF UK) in Prague. Since 1975 he worked in the Stellar Department of the Astronomical Institute of the Academy of Sciences at Ondřejov, from 2004 in the Prague branch of the Astronomical Institute, where he works till now. In 1980 he defended his PhD thesis and in 2001 he reached the title of DrSc. In 2004 he became an associated professor at MFF UK where he is an external lecturer. He was a supervisor of several MSc and PhD students at MFF UK, Faculty of Sciences of Masaryk University in Brno, and University of Trondheim where he was a visiting professor in the years 1997–2001. He has made several shorter stays at different foreign observatories and other institutions.

He deals with stellar astrophysics, especially with the models of stellar atmospheres, spectroscopy and photometry of stars, with relativistic astrophysics, in particular with theory of radiative transfer in general relativity. He also deals with the history of astronomy.